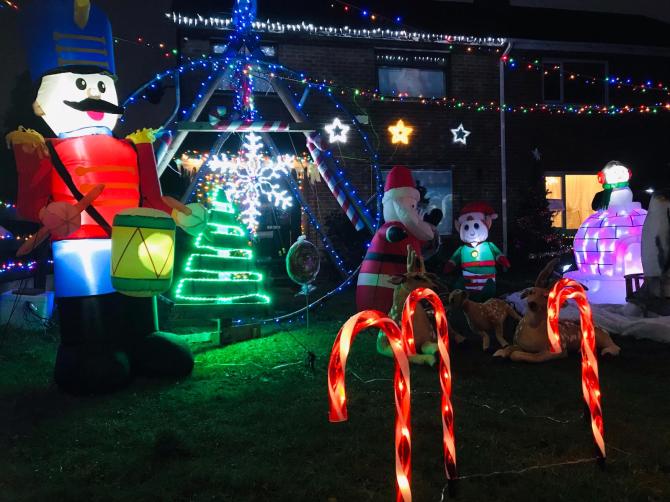 The Bell family home in Lurgan is well lit up for Christmas.

A Lurgan woman is proving that Christmas is the most wonderful time of the year by creating an eye-catching display at her home.

Faye Bell and her husband Stephen are certainly in the festive spirit with inflatable Christmas decorations, a snowfall projector and bright lights, plus so much more being a part of their display.

After creating a similar display last year, is a case of practice makes perfect as Faye explained that preparations didn’t take as long this time around.

“Preparing the display didn’t actually take that long,” she told Your Lurgan.

“We do a display every year but last year we upped the ante slightly by raising funds for Ceara School.

“My husband Stephen managed to do the majority of the work on a Sunday this time around and we added bits and bobs throughout the week.

“I know a few people have mentioned electric costs but we use LED lights, therefore our bill is only an extra £10 or £15 which isn’t too bad.

“The reaction has been great, people are telling us that they love it and will tell their friends and family to pay a visit.

“With winter and the dark nights, our neighbours have said the display brightens everything up and makes it a festive atmosphere.

“We are indebted to the support of local businesses such as Homebase who donated us an inflatable, B&M Bargains kindly provided us with icicle lights and Tesco donated a snowfall projector.”

The Bell family raised £398.00 for Ceara last year but Faye is hoping to beat that amount this time around.

“We decided to donate last year’s funds to Ceara as they couldn’t raise money due to the pandemic,” she added.

“We raised £398.00 but we would like to beat that amount this year and get the word of mouth out there.

“Money is being collected at the Spar on Mourne Road and we would like to thank everyone who has contributed so far.

“My children all went to Carrick PS and they have close links with Caera in terms of interaction before the pandemic struck.

“I also have friends whose children go there and I thought it would be great to support such a worthy cause so that they can buy new sensory equipment.

“The school are delighted and the new Principal wrote me a letter so people can understand how important their donations are.”

The display is on from 4pm to 9pm daily in Brookehill, BT66 8EY.

The Bell family kindly asks members of the public to adhere to social distancing measures.