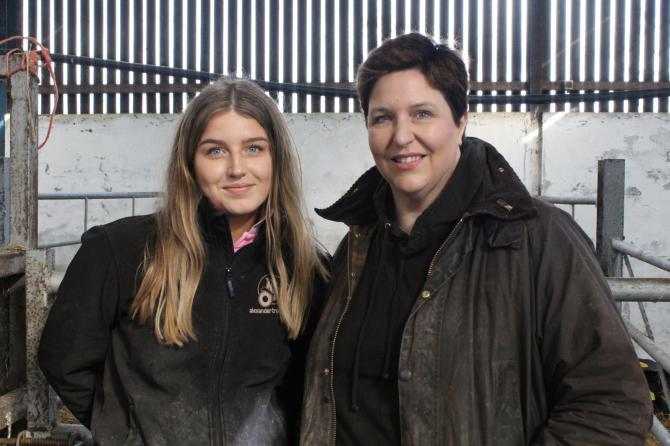 Lucy and Libby Clarke who are based near Magheralin.

The hugely successful ‘RARE BREED – A Farming Year’ returns to our screens next Tuesday 11th January at 7.30pm, for its tenth season, with 14 families from across Northern Ireland giving us an inside view of the ups and downs of their year in 2021. Rare Breed takes viewers into the heart of the farming world, giving a unique insight into one of Northern Ireland’s largest and oldest industries.

The tenth year of the series features several farming families including a dairy farm in Hillsborough; a potato grower in Downpatrick; and a beef and sheep enterprise in Co. Antrim. The series follows a young shepherdess who farms on the mountains of Co.Down; a pig farmer in Limavady; and a newly-engaged couple on their farm in Co.Tyrone. Series 10 also revisits some familiar faces to Rare Breed over previous years to catch up with the developments on their farms.

In Co. Down, near Magheralin we are reintroduced to Libby Clarke who was featured on Rare Breed in 2018. The mum of two rears award-winning beef Shorthorn and Charolais with her daughter Lucy. While Libby finds working with the cattle rewarding, she is also a keen sales woman and remarks, “I’d sell the shirt off my back if there was money in it”. Following in Libby’s footsteps, Lucy loves working with the cattle alongside her mum, although Lucy prefers to call her mum Libs! The team get to work with the general jobs of tending to the cattle as Libby looks forward to the year ahead.

Throughout the series, the show catches up with some familiar faces who have featured on previous series of Rare Breed including the McKeever’s who apple growers near Portadown, Co Armagh. Pat and Peter McKeever run Long Meadow Farm where they farm around 80 acres of orchard. They also now produce their own apple juice, cider, and apple cider vinegar.