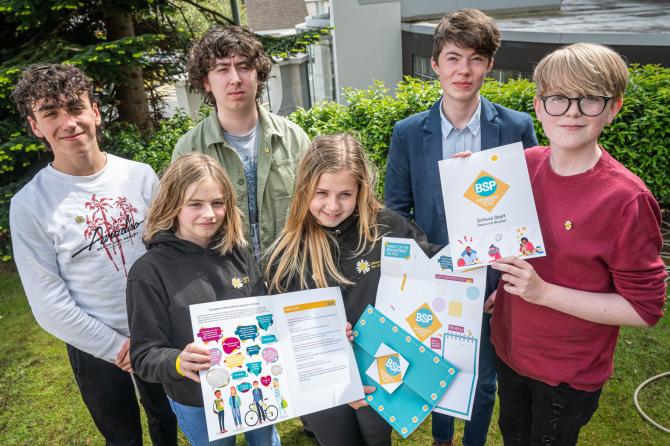 Young people supported by Cancer Fund for Children have launched a set of bereavement support resources to help others who have been bereaved.

The young people, who are aged between 12-17 years old are part of Cancer Fund for Children’s #iwill bereaved advocacy group, which was launched last year with support from the Co-op Foundation, to empower them to become peer advocates and to campaign for change.

Using their first-hand experience of grief, consulting with other bereaved young people and completing research, the group decided to focus their efforts on improving bereavement support in schools.

Their experience and research showed that the support offered to young people varied vastly between schools. They found that most often, young people were not involved in decisions about how they should be supported post-bereavement.

The aim of their social action project was ‘to ensure that schools are a safe, comfortable and supportive place for bereaved students in Northern Ireland.‘ Through speaking to members of school staff as part of their research, they found that this was a desire echoed by schools and that they would welcome input from young people who have directly experienced bereavement.

Speaking at the launch Chloe Truesdale (14), from Lurgan, who was part of the #iwill advocacy group said,

“When I first heard of the #iwill group I was nervous thinking no one will ‘get me’. Then I got to know everyone and we all just got along so well. Everyone understands what each of us were going through. It was amazing to get to know them all and to fix problems around bereavement. I loved that we all trusted each other enough to talk about how we were feeling. It was great for me in every way. It helped me remember that it’s okay to feel the way I do.”

“We’re delighted to be launching the #iwill group’s Bereavement Support Plan resources. These resources, which have been designed by the young people, are practical tools that can be used with students to involve them in decisions around the support they receive in school after a bereavement. They also highlight the importance of offering support on a longer-term basis, provide examples of types of support schools could put in place and include advice from young people for school staff on supporting bereaved students, so we hope they will be helpful resources for schools. I’m extremely proud of the #iwill group and their desire to use their own experiences to create change for other young people through the creation of their Bereavement Support Plan.”

Whilst this resource was created by young people bereaved through cancer, it is designed to be used with any young person who has experienced a bereavement.

For more information and to download the bereavement support resources go to cancerfundforchildren.com/resources.