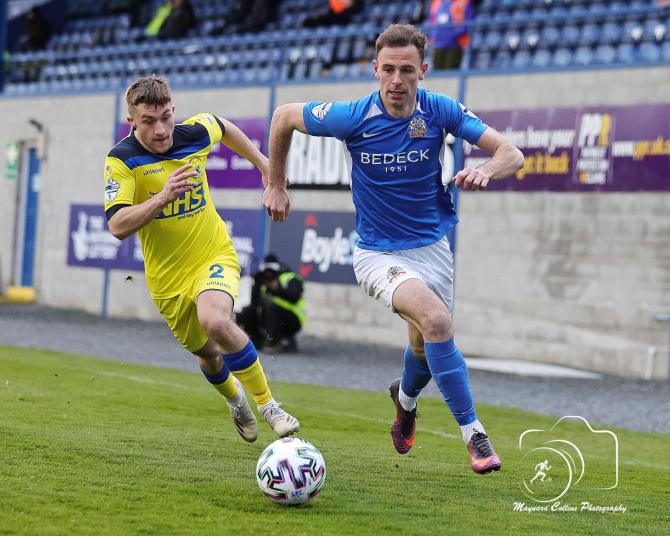 Glenavon’s dreams of lifting the Irish Cup on home soil came to a disappointing end when they were defeated 2-1 by fellow Mid-Ulster side Dungannon Swifts at Mourneview Park.

The Lurgan Blues, who went into the tie as favourites, can have no arguments about the result as they were outclassed and out played by their rivals who produced their finest display of the season despite currently sitting rock bottom of the Danske Bank Premiership.

Glenavon produced their best football in the opening period of the game taking an early lead on the tenth minute. Danny Purkis capitalised on a mistake from ex-international goalkeeper Roy Carroll, squaring the ball to team mate Matthew Fitzpatrick who fired the ball high into the net.

Despite going a goal down, Dungannon quickly settled into the game and almost levelled the score on 30 minutes when a superb ball from Caolin Coyle allowed Rory Patterson to get in behind the defence only to be denied by Craig Hyland.

Glenavon chose to ignore the warning signs and were punished two minutes later when Patterson linked up with Ryan Mayse who made no mistake for the equaliser slotting the ball into the keepers left corner.

Dungannon continued with their impressive display in the second half, limiting the home side's chances on goal with only Purkis managing a lob that sailed over the bar.

The breakthrough would finally come on 67 minutes when a succession of Dungannon corners troubled the Glenavon defence, with the ball eventually falling to Shane McGinty on the edge of the area who rifled home the winner.

Glenavon’s night went from bad to worse when they were reduced to ten men on 69 minutes after Matthew Snoddy received his second yellow card attempting to break up a Dungannon counter attack. Dungannon would make the most of the man advantage seeing out the game and progressing to the next round.