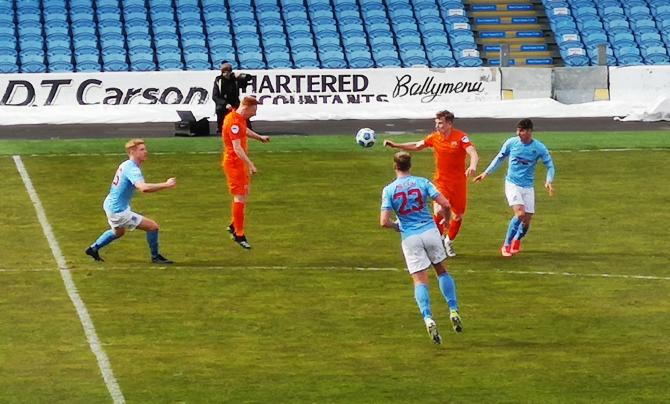 Action from Glenavon's game against Ballymena United at the Showgrounds.

at the Ballymena Showgrounds

Danny Purkis had the best of the early chances for Glenavon when he connected with a Calvin Douglas cross from the right, but he was unable to turn his header past Jordan Williamson.

The hosts had two great opportunities just before the break, both coming through Shea McCartan. First, Craig Hyland did well to stop the forward’s goalbound header, and then in stoppage time the Glenavon goalkeeper pushed away McCartan’s free kick from the edge of the box.

United got in front just after the hour mark when Paul McElroy capitalised on a short back pass from Sean Ward, with his shot across goal going in off the far post after he had rounded Hyland.

McCartan doubled their advantage from the penalty spot after Kofi Balmer was adjudged to have been fouled by Andy Doyle.

Glenavon scored a wonderful consolation goal through Calvin Douglas, who scored with a rocket of a shot after being set up by Peter Campbell.