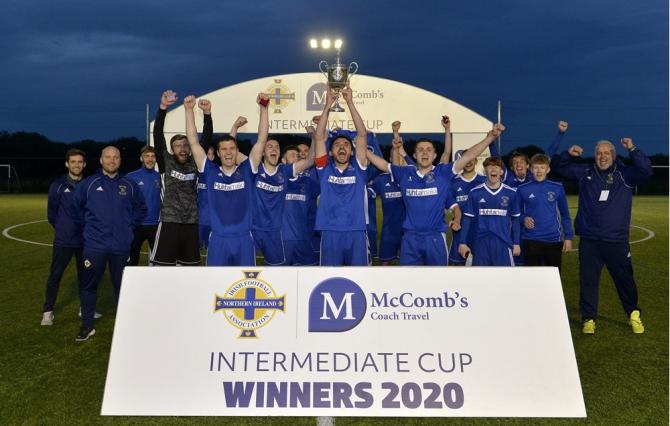 Dollingstown manager, Stephen Uprichard, admits his side are up against it when his team take on Larne in tomorrow's Irish Cup tie at Inver Park.

However, he has no regrets about playing in the prestigious competition, which has seen a number of teams pull out this season.

Those arguments have been well rehearsed. 'Scobie', however, would rather be playing football than not.

“It's the Irish Cup and you just have to take whoever you're drawn with,” he said.

“Just like every other club, we had the option to withdraw but the way I look at it, we all moaned about not having football to play but now it's a bit safer.

“We've all been doing the flow tests and everyone has been deemed clear to play so let's get back on the pitch and play and whatever happens happens.”

This year's shortened competition was due to include the 24 senior clubs of the NIFL Premiership and Championship along with the four semi-finalists of the McComb’s Coach Travel Intermediate Cup from season 2019-20, which Dollingstown won.

The remaining four places went to the next four teams ranked highest in last season’s league pyramid based on points per game.

“The players did that well in the Intermediate Cup and when the decision was made to let the top four or five teams in our league in we would have qualified anyway because we had had a good season in the league last year,” added the Dollingstown boss.

“They are the ones who earned that place so why not take it? Everyone has their reasons for playing or pulling out, and that's not for me to criticise but for me, we train on a Tuesday and a Thursday night to play football on a Saturday.

“It's a massive trophy so just to participate is a privilege.”

The Dolly Birds boss admits that an away tie to Inver Park was “probably the one draw we didn't want”.

He added, “The gulf will be massive but all we can do is try to be organised and try not to concede in the first 20 minutes and see how it goes.

“We know we're up and against it but I want us to go out and enjoy it. It'll be good to see the lads back out on the football pitch.

“I think our last match before our recent friendlies was in December. Before that we played another friendly back in September, when we had a few players missing with COVID scares.

“The important thing is getting back on a pitch – even though I would have preferred it to be on grass than plastic.”

Dollingstown look set to be with with out Matthew Taylor, who had joined the club from Newry City just before COVID hit.

“Matty got a badly bruised foot last week in a friendly,” added the Planters Park manager.

“I'd been chopping and changing the team to try and give everybody a few minutes and I think I made eight substitutions at half time to give them 45 minutes.

“I only have a squad of 19 after Aaron Duke left. I've a couple of lads in the seconds who are decent, such as James Mitchell and Adam Dennison, but their number one love is cricket. They're quite honest with me about that and I can live with that.

“Once the cricket starts that's their priority but they're excellent at it and they're two good lads.”

Fans are not permitted to attend the game at Inver Park, which gets underway at 3pm, however they can watch a livestream of the match on 247.tv/niprem for £7. This is the same service that Glenavon have been using this season, and if you have an account already set up all you need to do is log in and buy the game.