It rains goals as Hale puts Dollingstown out of Irish Cup 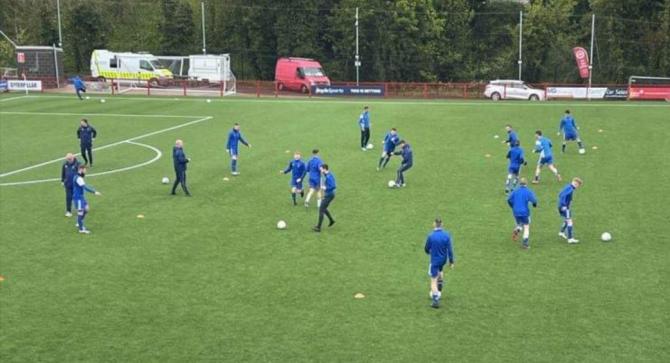 Dollingstown warm up for their Irish Cup tie at Inver Park. Picture courtesy of the Dollingstown Facebook page.

Larne took the lead on 11 minutes when Dylan Mottley-Henry scored with a tap-in. The former Bradford City winger slotted home from Andrew Mitchell's ball across goal from the left.

Dollingstown, however, rolled their sleeves up and almost immediately got back on level terms when Liam Toman struck a free kick from the edge of the box, but his curling effort was pushed away for a corner by Conor Mitchell.

The visitors were defending well and, despite being up against it, they looked well organised, defending in banks of four.

However, the Premier Intermediate Side would concede a second on the half hour mark with a goal almost scored in slow motion. Tomas Cosgrove hit the ball across the pitch and found Marty Donnelly, who took a touch before finishing.

Two minutes into the second half and Dollingstown got themselves back into the game when the unmarked Glen Hand was able to tap in.

Larne would restore their two-goal advantage on 52 minutes and once again Donnelly would find the net with Mottley-Henry once again involved, whipping in a cross to find the striker at the back post.

Four minutes later the Invermen added a fourth through substitute Ronan Hale, who found the net from a tight angle.

Lusty brought up the half dozen on his debut from the penalty spot after he had been brought down inside the box.

Larne bagged a seventh through Mottley-Henry, who tucked home after Hale's looping header came back off the bar.

And Hale completed his hat-trick in stoppage time, firing low into the bottom corner thanks to an assist from Lusty.