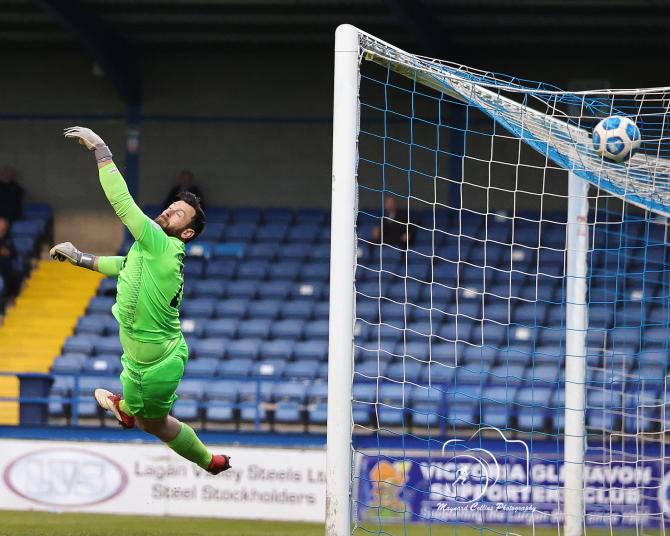 Glenavon continued in their pursuit to secure a European play-off place with a resounding victory against Warrenpoint at Mourneview Park.

They have now opened up a six-point lead over nearest rivals Ballymena United - for a few hours, at least.

A slow opening to the game saw little action at either end of the pitch before the Lurgan Blues finally settled into their stride with Andy Hall breaking the deadlock on 29 minutes. Robert Garrett produced the cross following a short corner, and it was Hall who rose highest to squeeze the ball past goalkeeper Andy Coleman.

Glenavon doubled their lead six minutes later when Daniel Wallace attempted to clear a cross from Daniel Purkis, but instead only managed to loop the ball over the keeper’s head and into his own net.

Glenavon continued their dominance into the second half with both Peter Campbell and Purkis coming close before Hall produced the wonder moment of the night.

A through ball to Matthew Fitzpatrick saw him bearing down on goal with only the keeper to beat, before Coleman callously brought the forward down 25 yards from goal to earn himself only a yellow card. The resulting free kick from Hall on 70 minutes is sure to put him in contention for goal of the month as his right foot strike bent round the wall and sailed past Coleman into the top corner.

Glenavon saw out the remainder of the game in comfortable fashion, sealing the vital three points in injury time when Purkis netted a tap in for the fourth after a shot from Matthew Snoddy was parried into the striker’s path.

The victory leaves the Lurgan Blues in a commanding position to secure the final European play-off spot with just two fixtures of the league campaign remaining.