John Cochrane - football to the core 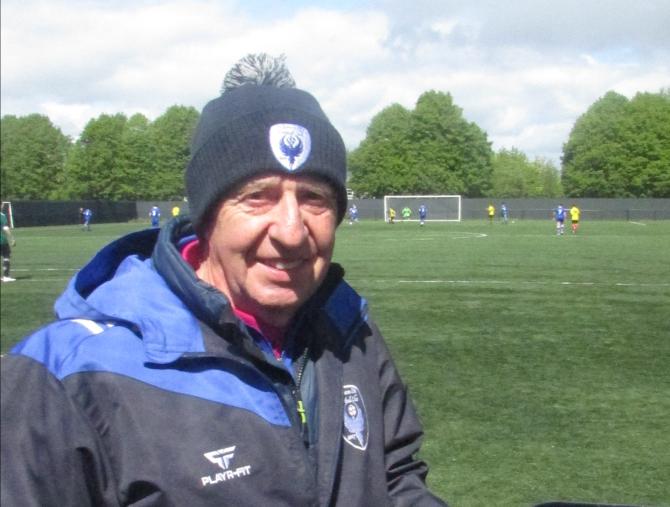 At 70 something, John Cochrane still has his daily run around Craigavon Lakes, but he spends most of what he describes as "down time" coaching the kids at Craigavon City FC.
From his early days in the Down and Connor league, he spent a period of his youth with Brighton before returning to the Irish League, playing a huge role in the formation of Craigavon side AFC.
However John, who could now be described as a local legend, is focusing on bringing a new generation of kids through the ranks at Drumgor.
Looking around at his club's splendid facilities, he said, "This used to be a cinder track.
"When I arrived from AFC it was always the ambition to do more coaching at junior level, but the standards of the facilities at the moment will see more finals being played at Drumgor.
"The Irish FA have been doing grassroots coaching here for a number of years. Everybody knows where Craigavon is."
Describing the great characters he met on the way as being "more important that the football", John's thoughts turned to a period over the pond with Brighton.
"It wasn't the same in those days, players at the moment are looked after, my family and my grandmother in particular wanted me home so you could say I was prompted," said John.
"I went straight into the Irish League, great times, great people, and a life time of memories."
John likes where City are going, and stresses, "Around 20 per cent of the kids at the club are foreign nationals, they are superb players. Playing football has brought them all together in a positive way."
Taking a look at what was going on over his shoulder, he added, "From under 5, right through to the 19's as you can see, the standard is very high.
"We have lots of coaches and the facilities are brilliant, but my big desire is to play summer football, and hopefully that won't be that far away."
John Cochrane has his heart firmly in Craigavon City.
"The lads (sons John and Tony) keep me on my toes so there is always plenty to do," he said.
"I will be around as long as I am needed, and at the minute if the legs hold out there will hopefully be more laps of the lakes."
From being a promising kid at Brighton, the Craigavon man remembers the people he met on the way, City have benefited from his lifetime in the game.