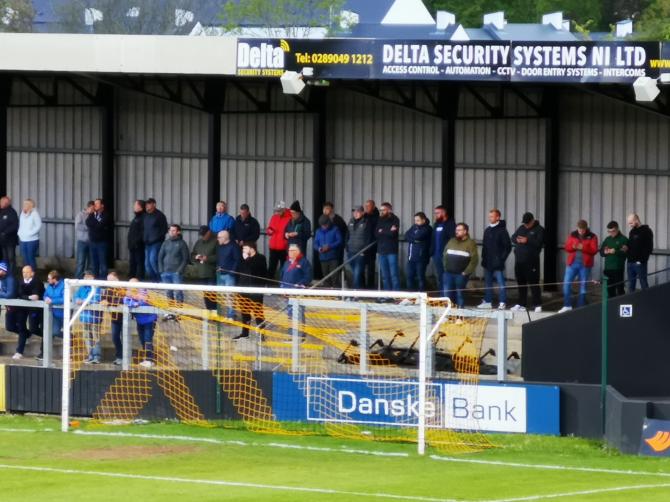 Fans were back in the ground tonight.

Glenavon have one foot in the European play-offs after beating Carrick Rangers 6-3 at Taylor’s Avenue in an incredible game.

The Lurgan Blues fell behind on 10 minutes as they were caught on the counter attack. Kyle Cherry’s through ball found Lee Chapman, who slotted the ball past Craig Hyland.

Glenavon huffed and puffed but couldn’t get back on level terms before the interval. The best of their chances came when Danny Purkis rounded Aaron Hogg but found the side netting rather than the goal.

Chapman could have had a second before the break too but his curled shot floated over the bar.

Carrick added a second through a header from Donaghcloney native Jordan Gibson on 49 minutes, but the game completely turned about five minutes later.

First Andy Hall found the net with another of his now-trademark spectacular free kicks, and then Peter Campbell tapped in from close range to put Glenavon back on level terms.

Campbell then put the visitors in front with a powerful close range drive, and Robbie Garrett made it 4-2 from inside the box.

Chapman pulled another goal back for Carrick, but then Hall bagged a fifth, heading home Campbell’s free kick.

Hall then rounded off the scoring in stoppage time with a retaken penalty after Josh Doyle was brought down in the box.

Even though Ballymena beat Warrenpoint 3-0, it means Glenavon just need a point to make sure of their spot in the play-off semi-finals.