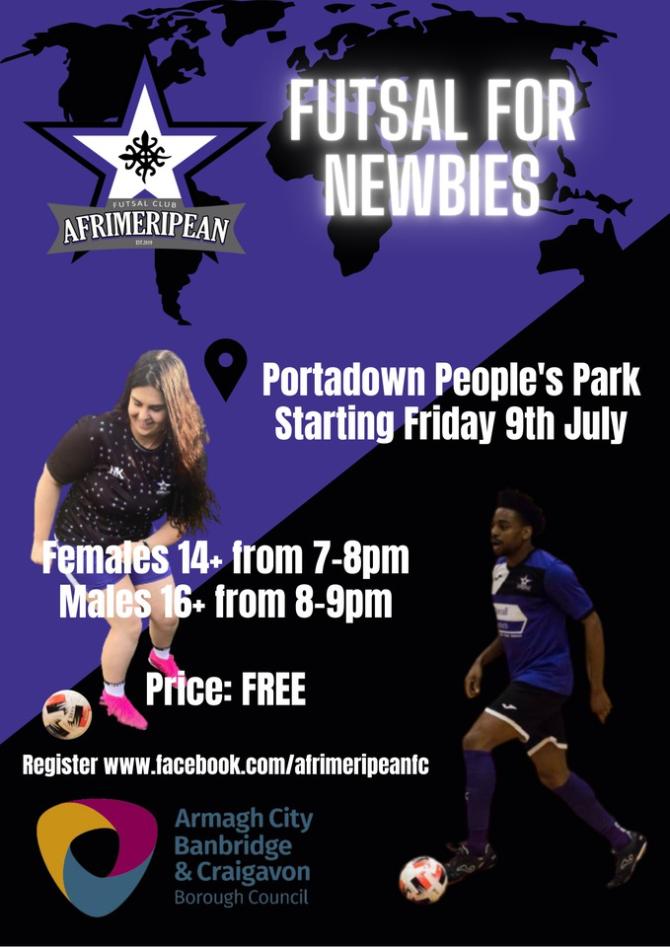 Afrimeripean Futsal Club have called on boys aged 16 and over and girls 14 and over to get involved in futsal in the local area.

The sessions started on Friday night with girls training at 7-8pm and boys 8-9pm and will be at Portadown People’s Park.

Futsal is a game growing with speed in Northern Ireland with an international team now competing with the top nations around the world.

The same can be said domestically as the Northern Ireland Futsal League will be going in to fourth season.

Afrimeripean’s recently competed in the Northern Ireland Futsal Cup quarter final but were to defeated by last year’s champions, Rosario.

Sparta Belfast lifted the Cup this year and as a result will go to Estonia at the end of August to compete in the preliminary round of the UEFA Champions League.

So what is futsal? Here are the Irish FA's guidelines:

In essence Futsal is a simple game that a recreational level can be played anywhere.  There are three core components that are specific to Futsal and are the three minimum criteria for establishing a game of Futsal.

Futsal is a 5-a-side game, however, up to 14 players can be used in one match and there is no limit on how long a player must stay on or off the court.  In order to restart the game after a ball has gone out of play, the ball is kicked back into play from the touch line and from corners.  Goalkeepers are allowed to come out and players are allowed to go into the penalty area.  A goal clearance must be thrown out rather than kicked.

For kick-ins, free kicks, goal clearances and corner kicks the player in possession of the ball has four seconds to restart play.  If play is not restarted within this time, an indirect free kick will be awarded to the opposing team.  Goalkeepers are not allowed the control the ball for more than four seconds in their own half.

Players are required to keep five metre from the player in possession of the ball at free kicks, corners, goal clearances, kick-ins and penalties.  A Futsal match consists of two twenty-minute halves that are played in real time, i.e. the clock stops whenever the ball goes out of play.