Glenavon put six of the best past Warrenpoint 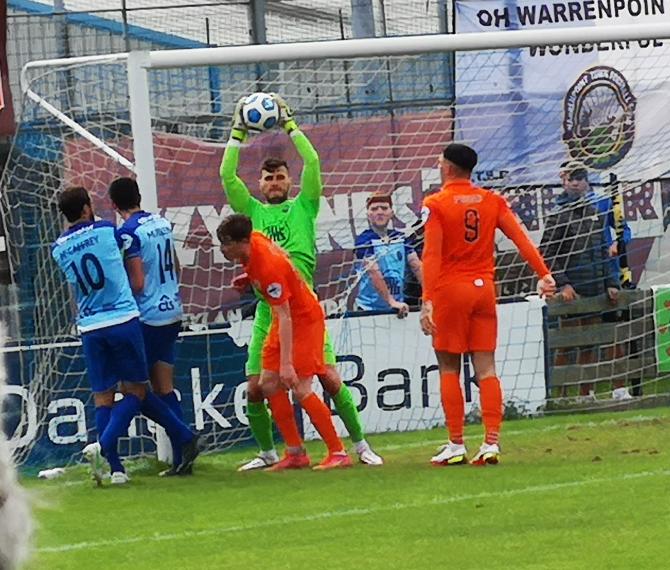 Action from Glenavon's win over Warrenpoint.

As the scoreline suggests, Glenavon were completely dominant in Saturday afternoon's fantastic victory over Warrenpoint Town.

The Lurgan Blues fell behind when Fra McCaffery took advantage of indecision in the Glenavon back line, slotting past Decky Brown on 11 minutes.

But Glenavon were back on level terms from the restart through Peter Campbell, who scored with a low finish, with an assist from Andy Hall with the ball going in off the far post.

And they were in front on 20 minutes when Mark Haughey flicked on Sean Ward's throw into the box, with Matthew Fitzpatrick getting the final touch at the back post to make it 2-1.

Fitzpatrick grabbed his second four minutes later when Michael O'Connor's diagonal pass found Hall. His low cross was turned in by the striker inside the six-yard box.

Just before half time Andy Waterworth made it 4-1 with his first competitive goal for the club, virtually lying on the ground to head in Hall's cross - a hat-trick of assists for the winger.

Ten minutes into the second half Brown was called into action, making a fantastic save to tip over Kealan Dillon's dipping effort with the faintest of touches.
Waterworth made it 5-1 when he got on the end of substitute Jack O'Mahony's pass to slot home.

Hall nearly had another assist when he powered over a ball for substitute Josh Doyle but Conor Mitchell pulled out a top drawer save, pushing the header away.

They nearly had a sixth in the closing stages when Andy Doyle went on a mazy run and hit a powerful drive, only to see it skim off the crossbar.

Danny Purkis hit the half-dozen when O'Mahony found Josh Doyle, who unselfishly teed up his strike partner to tap home.