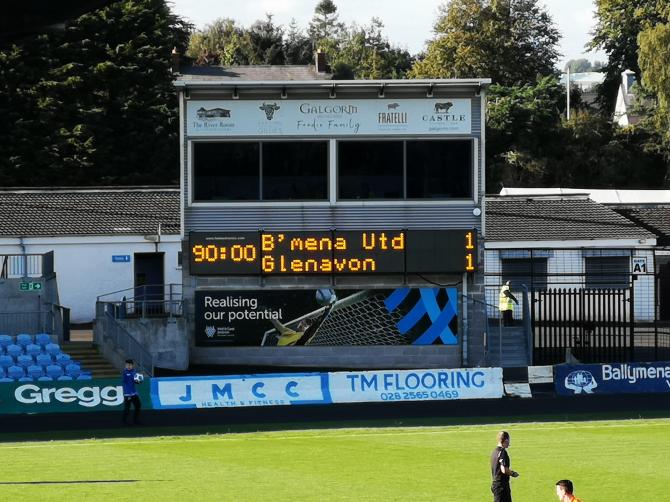 by Michael Scott at the Ballymena Showgrounds

A stoppage time Ryan Waide goal denied Glenavon all three points at the Showgrounds, just as the Lurgan Blues looked to secure a vital three points.

Matthew Fitzpatrick had given them the lead during what had been a dominant second half display, following a fairly open first half.

United will have felt aggrieved not to have been awarded a penalty inside the first minute when debutant Jonté Smith looked to be fouled inside the box by Mark Haughey, but referee Keith Kennedy awarded a free kick on the edge of the box. Bramall's cross was then headed wide by Leroy Millar.

Andrew Doyle, in for the injured James Singleton with Danny Wallace shifted to left back, headed a Peter Campbell corner on 11 minutes as Glenavon looked to break the deadlock.

Smith had another chance on 23 minutes when Ballymena broke down the right. The Bermudian met Ryan Waide’s cross but put it wide at the front post.

Glenavon will be wondering how they didn’t find the net four minutes from the break when United’s defenders blocked no fewer than four shots during a melee inside the box. Shouts for a penalty for handball in the middle of it all were ignored.

Moments later, down the other end, Wade’s powerful drive was saved with a strong arm by Brown, who also did well to save the follow-up by Smith.

Somehow, the teams went in at half-time 0-0.

However, the deadlock was broken six minutes after the restart when Kyle Beggs came in from the right wing to get past Ross Redman. The winger’s shot was parried away, but only as far as Matthew Fitzpatrick, who tapped in from close range.

And he almost had a second on 56 minutes when he leapt to get onto a Beggs cross but his header was wide of the mark.

United, who had certainly made a game of it in the first half, didn’t show up in the second with new signing Smith virtually anonymous, in comparison to his blistering start to the game.

But in stoppage time, Ryan Waide scored a dramatic equaliser, his shot from the edge of the box evading everyone moments after Declan Brown had to pull out a top drawer save to deny Jude Winchester.