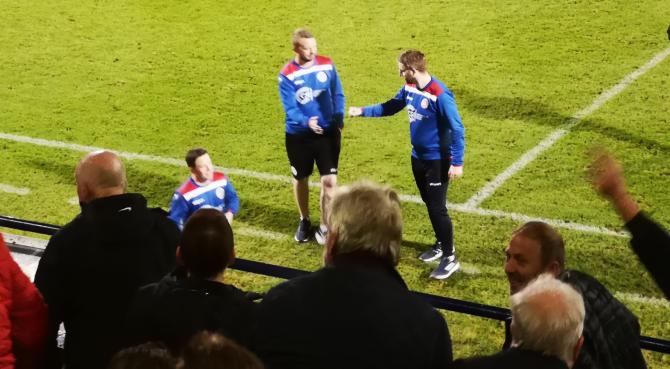 Holders Glenavon are out of the Mid-Ulster Cup at the first hurdle.

They suffered a shock round one defeat to Portadown outfit Hanover, which sets the Mid-Ulster League side up with a quarter-final tie with Loughgall at Lakeview Park.

Glenavon included a number of first teamers in order to give them minutes. Mark Stafford made his first start of the season while Andy Hall, Aaron Harmon and Josh Doyle all featured, alongside youngsters Jack O’Mahony, Jamie Doran, Ross Hunter, Josh Doyle, Harry Lynch and Harry Norton.

The hosts had their first opportunity of the game on six minutes when Conor McCloskey moved inside from the left, but his shot was wide of the goalkeeper’s far post.

Aaron Harmon volleyed over from a corner before Josh Doyle fired low at Hanover shot stopper Matthew McClurg a short time later as the Lurgan Blues put on early pressure.

With half an hour on the clock Conor McCloskey was unfortunate when his effort from inside the box was tipped over for a corner by McClurg.

Just before half time Hall tried his luck from a free kick but it sailed over as Glenavon failed to break the deadlock.

On the hour mark Hanover’s Gareth Rees had their best chance of the game to that point when he found himself in space to get a shot away inside the box, but his effort, which was hit with venom, was high of the target.

The second half was devoid of any other real chances until the 78th minute when Hanover were awarded a penalty after Henry Capper was clipped.

Captain James Sergeant sent the goalkeeper the wrong way with the spot kick.

The Lurgan Blues nearly levelled with five minutes to go when Harmon’s header was deflected for a corner.

But it is the Portadown Blues, rather than the Lurgan Blues, who are celebrating tonight.