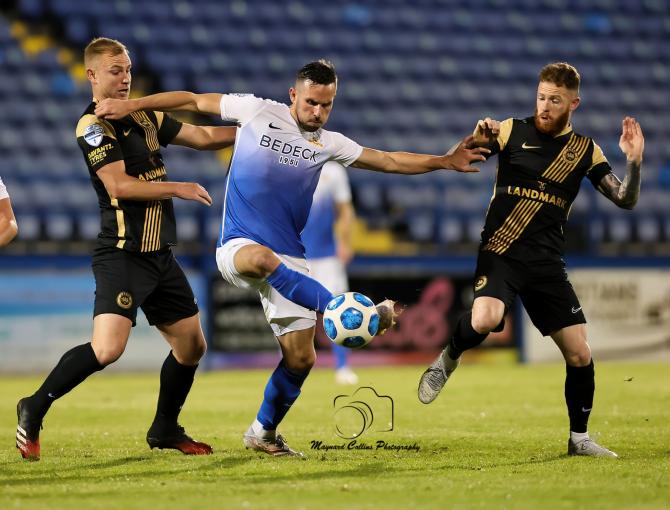 It took a speculative effort from 25 yards to consign brave Glenavon to an unfortunate defeat against Larne.

Andrew Mitchell’s effort 11 minutes from time was all that could separate the two teams on a cold September evening at Mourneview Park.

Andy Waterworth came close on six minutes when he seized upon a through ball, with his effort creaking narrowly wide of the near post.

Kyle Beggs went narrowly wide a few minutes later when it looked like he was about to pull the ball back to Waterworth, but his shot hit the side netting.

Just before the half hour was on the clock Larne went close when Navid Nasseri hit a low drive at goal, but Declan Brown got down low to tip the ball away for a corner.

And the Lurgan Blues had another let-off on 35 minutes when Cian Bolger headed Larne’s best chance from a corner narrowly wide.

Ten minutes into the second half Beggs came close again, sprinting down the left hand side to have a go but the shot was saved at the near post.

On 64 minutes Kofi Balmer and Lee Lynch both went close, the former with a chance from a corner, but the deadlock remained in tact.

But it was to be broken 11 minutes from time. Larne’s Mitchell hit a shot with an extraordinary amount of dip on it from 25 yards, beating Brown.

Glenavon will take confidence from their performance into Saturday’s game against Glentoran, who were beaten 3-0 by Belfast rivals Linfield.