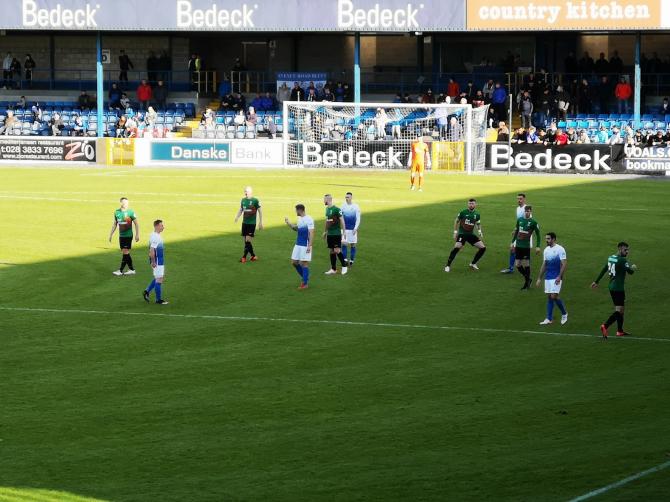 Glenavon suffered another disappointing loss on Saturday afternoon, this time at the hands of Glentoran.

The visitors went in front on 16 minutes following a free kick on the left hand side by Plum which made its way through to Declan Brown. However, he palmed it back out to Luke McCullough, headed home from six yards out.

But beyond that there wasn’t much else to talk about – Glentoran dominated possession and territory but couldn’t find the target.

Glenavon, when they did have possession, were lacking in the final third and Aaron McCarey wasn’t tested in the first 45 minutes bar a Calum Birney header which was cleared off the line.

However, the Lurgan Blues started the second half brighter and a Birney header was wide of the mark.

Jay Donnelly came close at the other end when he flicked the ball up and hit a shot, but he hit the side netting.

As the game wore on Glenavon were threatening from set pieces. Mark Haughey was on the end of a couple of O’Connor corners, but failed to trouble McCarey.

But it was from open play that Glenavon got back on level terms. Matthew Snoddy, with his second attempt, whipped a ball across for Matthew Fitzpatrick to nod past McCarey.

Their lead less than a minute when Haughey was adjudged to have fouled Plum. Jay Donnelly restored the Belfast side’s lead from the penalty spot.

Fitzpatrick almost levelled things up with an overhead kick as the game ebbed and flow.

But in the end the three points headed back up the M1 - Glentoran securing their first win at Mourneview Park since 2016.