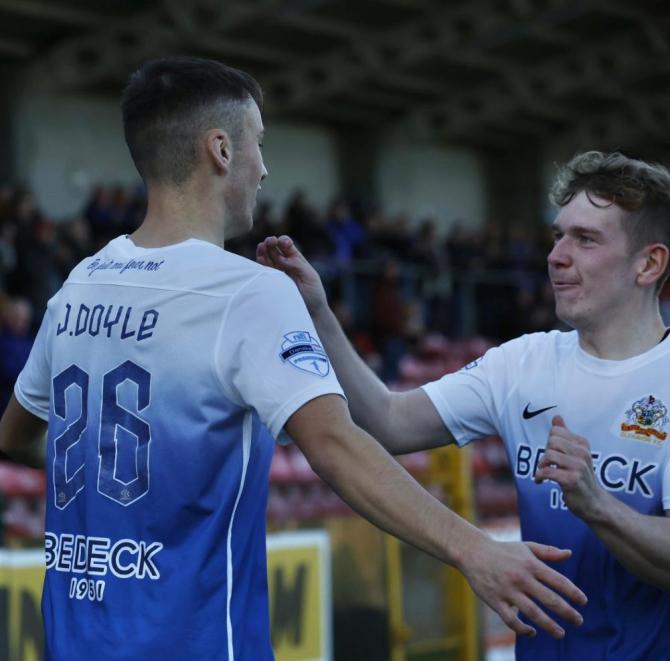 Glenavon will be wondering how they didn’t get at least a point – if not all three – having been the better team against Cliftonville.

Josh Doyle had given the Lurgan Blues an early second half lead, but two goals in as many minutes from Ryan Curran earned the Solitude side the win.

The Mourneview men thought they had grabbed a late equaliser late on too, but had a goal ruled out and a man sent off in the moments afterwards.

Despite the Reds being top of the table, it was actually the visitors who applied the early pressure. Declan Dunne was forced into a save when he had to stop a Peter Campbell free kick on nine minutes.

Cliftonville’s first chance came through Jamie McDonagh on 24 minutes after Ronan Doherty had been fouled on the left hand side of the Glenavon box. James Taylor had to be at full stretch, diving across the ground to stop McDonagh’s effort.

And two minutes later the dangerous Joe Gormley should have put the hosts ahead when he burst through the Glenavon defence, catching them on the counter attack, but the sting was taken out of his shot when it took a deflection off Calum Birney. Taylor was able to gather up the ball from there.

The ball was in the Glenavon net 31 minutes when Rory Hale found Chris Curran. His ball across goal was tapped in by Gormley, however the assistant referee had his flag up and the goal was ruled out for offside.

On 42 minutes Glenavon were unlucky not to take the lead themselves. A Kyle Beggs free kick was whipped in towards Mark Stafford at the back post, and while the defender was able to get his head onto the ball, the delivery perhaps had a little bit too much on it as Stafford’s connection just wasn’t quite right, with the ball going wide.

In stoppage time Campbell scraped a shot wide, with Glenavon ending the scoreless first half the better of the two teams.

With a minute gone in the second half the Lurgan Blues took the lead when Dunne passed the ball straight into Josh Doyle’s path, with the striker making no mistake.

Aaron Donnelly volleyed over the bar as Cliftonville looked to get back on level terms on 53 minutes. Hale’s cross was headed back into Donnelly, who was waiting on the edge of the box, but couldn’t keep his shot down.

Donnelly again tested Taylor with a free kick after Sean Ward was booked for hand ball. Doherty dummied the shot, jumping over the ball, but the goalkeeper was equal to the effort.

Just before the hour mark the Lurgan Blues could have doubled their lead when Matthew Fitzpatrick stretched to get onto a cross from Campbell. He was unfortunate to see the ball go over the bar.

Cliftonville thought they had equalised again on 62 minutes but referee Keith Kennedy ruled the goal out for a foul on Stafford.

The hosts pressed for an equaliser but were frustrated by a Glenavon defence which was largely rock-solid, restricting Paddy McLaughlin’s side to half chances and shots from set pieces.

But the teams were level on 81 minutes when Ryan Curran finished inside the box from close range.

And there was nothing Taylor could do about the goal which put Cliftonville in front just a minute later. Curran took a touch on the edge of the box before unleashing a shot which nestled in the top corner.

In the 90th minute the game took another dramatic turn when Mark Stafford had the ball in the net for what looked to be a Glenavon equaliser, but the linesman’s flag was up for an offside against the defender. In the protests that followed Matthew Snoddy received his marching orders from referee Kennedy.