Glenavon boss saw fear in his players before Ballymena defeat 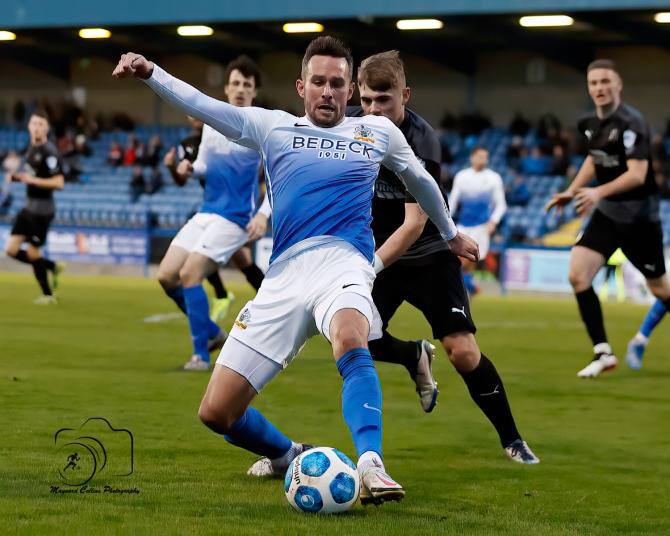 Second half substitute Andrew Waterworth in possession for Glenavon during their defeat to Ballymena United.

Gary Hamilton said he saw fear in his players’ eyes before Saturday’s loss to Ballymena United.

Glenavon fans booed their team off the pitch at the final whistle, with Hamilton saying he had every sympathy for the supporters.

“Deservedly we got stick after the game. I thought we were really poor,” he said.

“I don’t know what it is with the players. They’ve put in good performances like they did against Cliftonville and Glentoran over the last wee while and really put it up to top sides.

“Then we start this game and within five minutes Ballymena had three corner kicks which they should score from.

“We looked as if we were playing with fear. When I was doing the team talk before the game I could see fear in the changing room, which I didn’t like. As coaching staff we talked about it and we hoped it would not be like that when they started the game.

“Unfortunately for us I thought we were panicky all over the pitch and I though Ballymena were better than us at playing the conditions. They were up for the fight.

“It was a roll your leaves up day but we just didn’t do that.”

Conor Keeley will be wondering how he didn’t put the visitors in front on eight minutes when his header on the edge of the six yard box from a Ross Redman corner came back off the crossbar.

And they were unfortunate not to take the lead on the half-hour when, after fancy footwork by Jude Winchester, the ball was pulled across to Kenny Kane. Danny Wallace came to the rescue on the line or Glenavon.

Kane did get the opening goal for the visitors four minutes later, after he turned expertly in the box before finishing.

There wasn’t much to write about in the second half, because while Glenavon did throw the kitchen sink at Ballymena in the latter stages of the second half, they still weren’t able to test Jordan Williamson.