Campbell double not enough for Glenavon at Larne 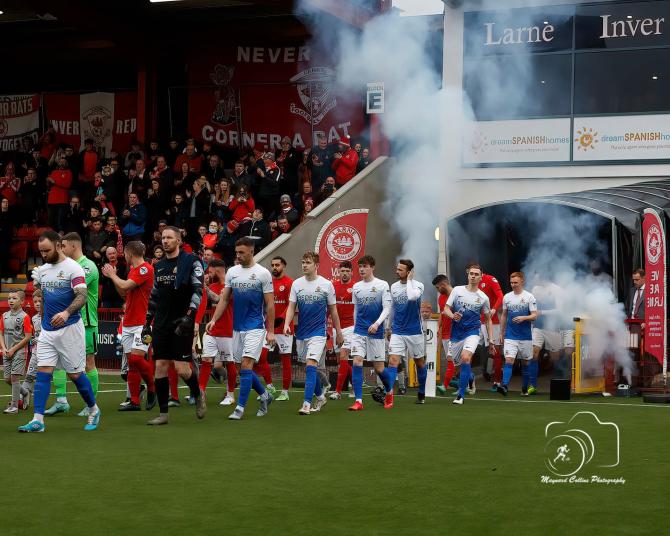 The teams make their way onto the pitch at Inver Park. Picture: Maynard Collins.

If only Glenavon had started the way they had finished, the final result at Inver Park this afternoon could have been very different.

However, the depleted Lurgan Blues – who were missing no fewer than six regulars – acquitted themselves well and might feel they should have got something in the end from their trip to Larne.

The game got off to the worst possible start for the Lurgan Blues, who fell behind with just two minutes on the clock. Ben Doherty got onto the end of a Navid Nasseri cross from the right and was given the time and space to volley into the net, the ball crossing the line after coming off the post.

But as the clock rolled round to 16 minutes Jeff Hughes doubled the Larne lead, scoring after Glenavon’s defence failed to clear a Doherty corner.

The visitors pulled a goal back on 21 minutes when Sean Ward played Peter Campbell through on goal, the winger rounding Ferguson before finishing.

However, despite Glenavon’s improved performance as the half went on, Larne managed to restore their two-goal advantage on 35 minutes. A slip by Danny Wallace allowed Doherty, who had been found by Nasseri, to pull the ball across the face of goal for Davy McDaid to tap in.

They could have had a fourth moments later but James Taylor pulled off a superb diving save to tip Lee Lynch’s effort over the bar.

The hosts pushed for another goal at the start of the second half, Nasseri’s effort being pushed into the path of Doherty, whose effort was cleared off the line by Calum Birney.

But Glenavon reduced the difference to one goal a Hall corner found Campbell at the back post, with the defender scoring with a low shot on 65 minutes.

Glenavon searched for an equaliser with Andy Doyle of all people coming close to levelling things up with a powerful shot. However, Ferguson was equal to it.

In the end a thrilling second half came to an end with Larne getting all three points.

Glenavon are back on the road again next Saturday with a trip to Milltown to face Warrenpoint, kick off 3pm.