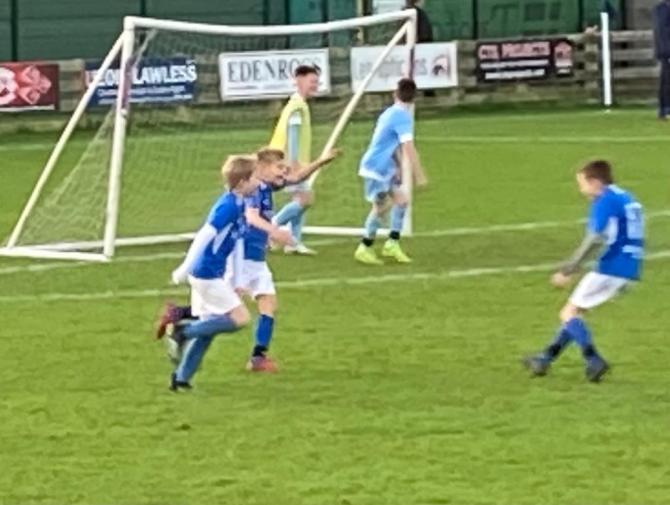 A Glenavon Academy player celebrates scoring at half time against Warrenpoint.

A Michael O’Connor brace and a Matthew Fitzpatrick strike earned the Lurgan Blues three points at Milltown on Saturday.

Glenavon could have had a penalty on eight minutes when Peter Campbell was hauled down by a Warrenpoint defender. Play was allowed to continue and James Taylor had to be alert as the hosts went up the other end and had several attempts to break the deadlock, however the keeper did well to save each opportunity.

On 18 minutes Campbell was unlucky not to find the net when he turned twice before shooting low at goal, but Conor Mitchell saved well with his knees.

A ball across goal on 26 minutes by Josh Doyle couldn’t be converted as Glenavon looked to force their way into the lead.

Just before the half hour mark the opening goal when Matthew Fitzpatrick beat the offside trap after being played through by Andy Hall. Mitchell raced out to meet him but the Glenavon striker lifted the ball over the goalkeeper and took his opportunity well.

Five minutes before the break Warrenpoint could have levelled when a number of Glenavon defenders were caught out of position. Jonathan Leddy’s drive across goal was ultimately wide of the mark.

Two minutes later Campbell bore down on goal. He tried to tee up Josh Doyle but he was unable to stretch far enough to turn the ball goalward.

On 44 minutes Glenavon doubled their lead from the penalty spot through Michael O’Connor. Campbell had given up on a lost cause on the byline and was brought down on the edge of the six yard box.

Then, in first half stoppage time, O’Connor doubled his tally with a spectacular volley on the edge of the box after Warrenpoint failed to clear a corner kick.

He could have landed his hat-trick on 52 minutes in spectacular style with an audacious free kick from the halfway line. However, the Beckham-esque effort was just over the bar.

On 68 minutes substitute Calum Birney could have added a fourth was a powerful drive, however Mitchell tipped it onto the bar.

And it was the woodwork that came to the Point’s rescue shortly after when a cross from Danny Wallace came back off the crossbar.

With 71 minutes gone Mitchell pulled off another top drawer save to deny Josh Doyle.

Five minutes later Andrew Doyle attempted a speculative drive from inside his own half, but it failed to test the goalkeeper.

The win takes Glenavon up to eighth in the league.