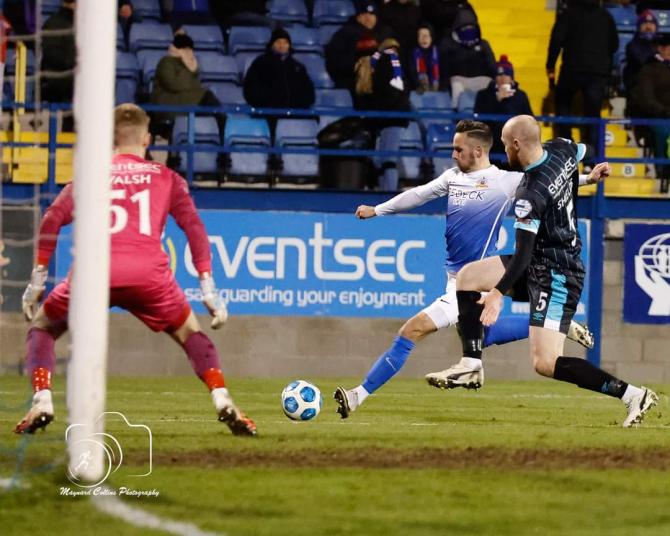 Andrew Waterworth has a shot for Glenavon during their defeat to Linfield on Saturday evening.

Gary Hamilton felt Linfield were simply too good for his Glenavon side during last night's 3-0 defeat at Mourneview Park.

The Mourneview Park boss held his hands up after the game, adding that his side made more of a game of it in the second half when they changed formation.

"I thought we started the game really well," he told the club's YouTube channel after the game.

"Linfield grew in confidence from that and they interchanged all over the pitch. I thought Fallon, Stewart and Salam were excellent, we couldn't cope with their movement.

"We always play 4-4-2 and at half time we changed it because their confidence was sky high.

"We went to 4-3-3 to match them up and we competed more without working their goalkeeper, which disappointed me. If we are going to win or draw games we're going to have to score goals.

"I thought we showed a bit of character in the second half and didn't let the game run away from us altogether.

"There's no denying that we weren't good enough but I thought Linfield were top notch."

Christy Manzinga put the visitors ahead on 12 minutes, scoring at the second attempt after getting onto Kirk Millar's long pass.

The same player scored just before the half hour mark, again from a Millar pass which this time came across the box, with Manzinga finding the net from close range.

Ahmed Salam put the game beyond doubt on 39 minutes, volleying past Taylor.

Glenavon looked a lot brighter in the second half and could have pulled a goal back through substitute Matthew Snoddy, but his effort was turned away for a corner.

Later, Andrew Waterworth had a shot turned away as Glenavon tried in vain to pull a goal back.

The Lurgan Blues will have little time to assess Saturday's loss as they are back in action on Tuesday night away to Dungannon Swifts.