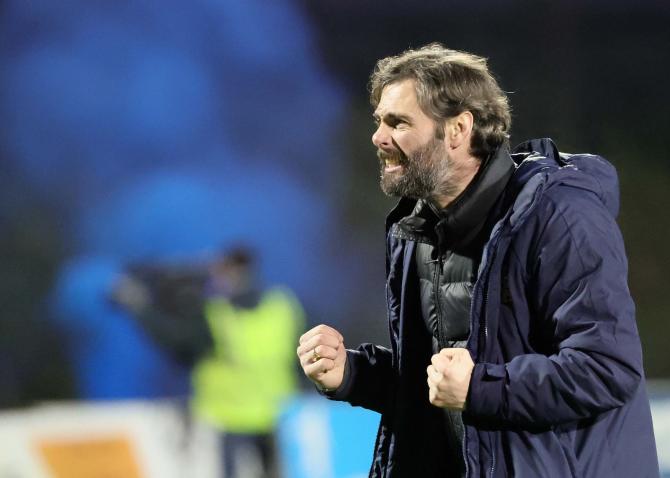 Peter Campbell's first half strike earned the Lurgan Blues their first festive win in Portadown since 1967.

However, a fantastic rear guard performance saw Glenavon, led by an elated Gary Hamilton, hold on without any real threat from the Ports.

Glenavon's first foray into the box came when a ball over the top of the Portadown defence found Andy Hall, but his cross was cut out by Jethen Barr.

The Ports thought they had gone in from on seven minutes, but referee Keith Kennedy ruled the goal out for a foul on Sean Ward.

The game ebbed and flowed until the 37th minute when Peter Campbell put Glenavon ahead. He teamed up with Matthew Fitzpatrick, with Campbell finding the net from six yards.

But the winger's celebrations were short-lived. Kennedy sent Campbell off almost immediately after the restart for what looked like a straightforward challenge on McKeown.

And then, with three minutes to go before the interval, Glenavon were reduced to nine men. This time Robbie Garrett was given his marching orders for a challenge on Michael Ruddy, much to the consternation of the Lurgan Blues.

Down to nine men, it was going to be a battle for Glenavon in the second half. However, at least they still had a goal advantage to defend.

The Ports had a chance to go in front less than a minute into the half, but Shea Conaty scuffed his shot which went wide.

Just before the hour mark a scuffle broke out amongst both teams during a break in play. Glenavon's Danny Wallace was booked along for the crime of being there, while Sammy McLeod was also yellow carded by the referee.

On 67 minutes the hosts should have levelled when Lee Bonis had a free header from a cross from the left, but the striker put it straight at James Taylor.

Harry Anderson also could have pulled the teams onto an equal footing but his header looped over the bar.

It was a fantastic defensive performance by the Lurgan Blues, with special mention going to the outstanding Danny Wallace who didn't miss a kick all afternoon.