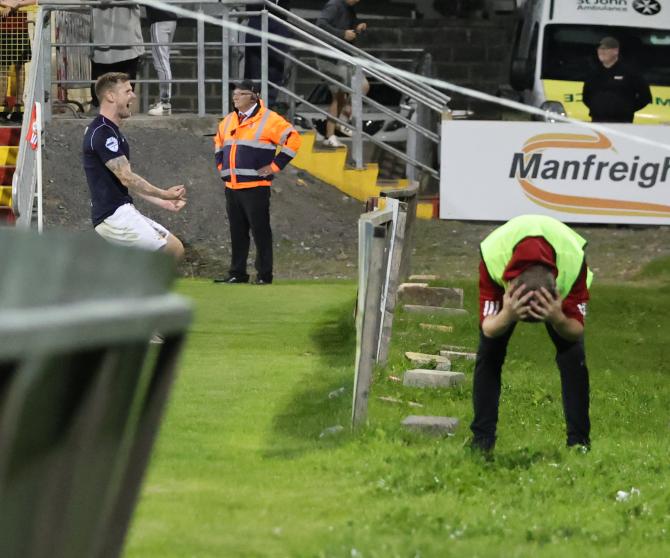 Michael O'Connor celebrates following his late equaliser against Portadown on the opening day of the season. Picture: Maynard Collins.

Due to a combination of the Ports not being in the Premiership and COVID-19 this is the first time the rivals have met in the traditional Christmas fixture since 2016.

The Lurgan Blues are also looking to end a run which has not seen them win a festive fixture against Portadown at Shamrock Park since the 1960s, according to one local statistician.

With the Ports not having won at home this season, there's plenty at stake in today's derby.

Hamilton said that while it was “disappointing” that their mid-week game against Crusaders had been called off, his team are well prepared for today's game.

“We were in training last Monday and Wednesday and Christmas Eve as well so we're preparing as best as we can for the match,” he said.

“We know it's a long time since we won at Shamrock Park on Boxing Day and for me, as a supporter, it hurts because at the end of the day we want to win games, especially Boxing Day games, for the fans to get bragging rights because that's what it's all about.

“It's been a long time coming and I'm just hoping that the boys can deliver this year.”

Aside from their 2-0 defeat last time out against Crusaders, Glenavon's form of late has been “decent” according to Hamilton.

Prior to that loss they had won four of their previous five outings, including three-in-a-row against top six sides.

“Last time we were beaten by Glentoran who are a very good side and as I've said before, it was on a Friday night where full-time players had been sitting at home resting all day playing against part-time players who had been working all day, at the end of their working week, who mentally and physically were tired and it showed in the match,” the Glenavon boss reiterated.

“However, [on Monday], everybody is in the same boat. They're part time, we're part time – we've both had a couple of days' break.

Glenavon will be without Matthew Snoddy, who is suspended after picking up five yellow cards. His suspension would have been cleared only for that Crusaders game being called off during the week.

Jamie Doran and Jack O'Mahony will also miss out through injury while there's good news for Mark Haughey and Conor McCloskey who, while it's reported that they won't be fit enough for a starting place, could be in line for places on the bench.

Today's game, which kicks off at 3pm, is sold out.