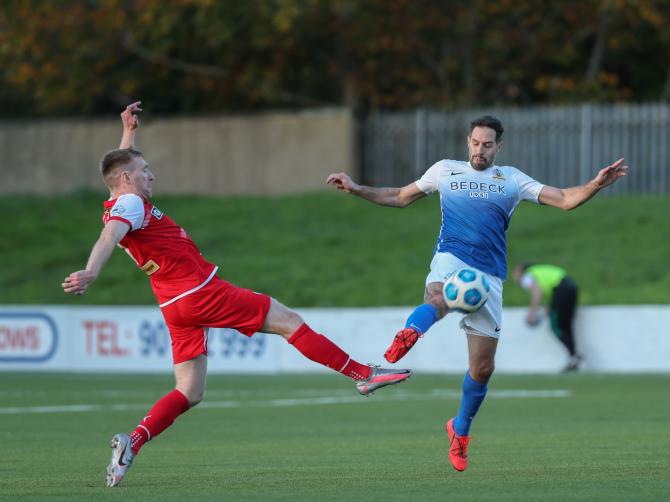 Glenavon hope to maintain their good run of form as they face Cliftonville at Mourneview Park tomorrow afternoon (KO 3pm).

The Lurgan Blues have won four out of their last five Premiership contests - including last Monday's festive win against Portadown at Shamrock Park.

That success ended a 54-year wait of a victory on Boxing Day at their nearest and dearest but it came at a cost as Danny Wallace received his fifth caution of the season, meaning he is absent for the visit of Paddy McLaughlin's side tomorrow afternoon.

Furthermore, Glenavon boss Gary Hamilton will have to do without the services of Peter Campbell and Robbie Garrett as the pair were sent-off in the win as the visitors miraculously played almost an hour with nine men.

Despite preferring having those players at his disposal, Hamilton is fully aware his side has what it takes to secure maximum points against a side placed third in the standings.

“All games are difficult," he told Glenavon Media.

“There are no easy games and we will be missing Danny Wallace, Robbie Garrett and Peter Campbell through suspension.

“We will prepare the boys the best we can, get a team sorted and hopefully they can put in a shift like they did against Portadown.

“If they can do that, they stand the chance of getting a result against anybody."

One player Hamilton will look to for goals is Matthew Fitzpatrick, with Hamilton full of praise for the ex-Coleraine striker for his performance on Boxing Day +1.

“I don’t like singling people out but I thought Matthew Fitzpatrick was the best player on the pitch by a country mile against Portadown," he added.

“He’s been a massive signing as has Danny Wallace.

“I’m so delighted for him and I said this about Eoin Bradley when I got the job and brought him here that if they started football at a young age, they wouldn’t be here, they’d be over the water that’s how good they are."