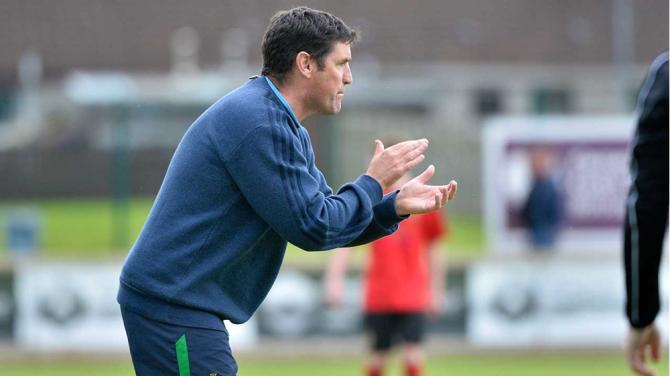 Frankie Wilson, who had a distinguished career in the Irish League and was assistant manager with Colin Malone when he brought Lurgan Celtic to an Irish Cup semi-final, says he has "many happy memories" of Lurgan.

He's urged Oxford/Sunnyside to "remain composed" when they travel to Windsor Park for Saturday's cup tie against Linfield.

The Belfast schoolteacher, who had good times with clubs like Bangor, Distillery, Cliftonville and Omagh Town, has vivid memories of the day when Celtic took on Linfield in the semi-final.

He said, "Our players were brilliant on the day. We had come from a superb quarter final win at Shamrock Park against Portadown, and Ronnie McFall stepped down straight after the game.

"When you look back at the Linfield game, Aaron Haire was brought down during the first half for what appeared to be a nailed on penalty. Linfield looked a bit edgy at that stage, so had we taken the lead who knows how it would have turned out.

"I loved my time at Lurgan Celtic. To be honest Colin (Malone) was brilliant to work with, he let me do my own thing with training and tactics, but I also learned a lot from him, particularly from his man managing skills. He knows the game inside out, so I wasn't at all surprised when Lurgan Celtic blossomed under his management."

So how should Oxford approach the visit to Windsor Park? Frankie Wilson said the big pitch will suit their ball players.

"I know their manager, Partick McCrory, likes his side to build from the back, although they will be under pressure, but the pitch is bigger than they are used to so they will get space to play.

"It's all about staying in the game, keeping it tight for the first 15 then build to half time. The longer they can keep Linfield scoreless the better," stressed Wilson.

With Oxford/Sunnyside still challenging for league honours they will have a big traveling support in Belfast for the cup tie.

Frankie Wilson said that while the fans will have a huge role, the team's players should go to the venue with "no fear".

"Oxford have players in their side who have played at the venue before. Both Deckie McVeigh and Aaron Rodgers were with Lurgan Celtic when we were there, and if the side want leadership, they have it in abundance with Peter McCann in midfield who has Irish Cup medals in the cabinet. He will settle the young players and will be priceless on the big day.

"My message to Patrick McCrory and the lads is, yes, of course enjoy the day, but also have a go - there is nothing to lose.

"I wish them luck", concluded the former Lurgan Celtic assistant boss, who is currently in charge of Banbridge Town.