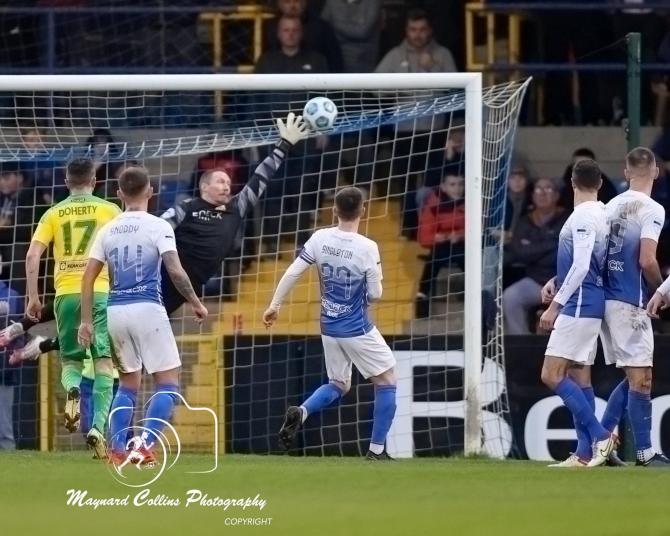 Glenavon boss Gary Hamilton had no complaints after his team were soundly beaten by title contenders Cliftonville on Saturday.

Levi Ives put the Reds in front on 17 minutes with a well-struck free kick. Conor McCloskey was booked for a foul on Jaimie McDonagh on the edge of the 18 yard box. Ives curled the resulting free kick over the Glenav wall and into the top corner of the net.

Glenavon looked to respond and four minutes later had a chance when James Singleton’s throw in was controlled by Matthew Snoddy and flicked into the path of Matthew Fitzpatrick on the penalty spot, but he was unable to get his shot on target.

McDonagh was booked on the half hour for high feet, making contact with McCloskey’s head down the Glenavon left.

Cliftonville had a chance to double the lead on 32 minutes when Rory Hale’s cross found Kris Lowe, but he hit the side netting with his shot.

Three minutes later Hale had a go himself from distances but his swerving drive said over James Taylor’s goal.

Early in the second half Cliftonville came within a hare’s breath of scoring a second when Jonny Addis headed McDonagh’s corner downwards, with the ball bouncing upwards and coming back off the crossbar.

Last gasp defending by Matthew Snoddy denied the visitors a third as he cleared a Ryan Curran effort off the line with a fantastic diving header.