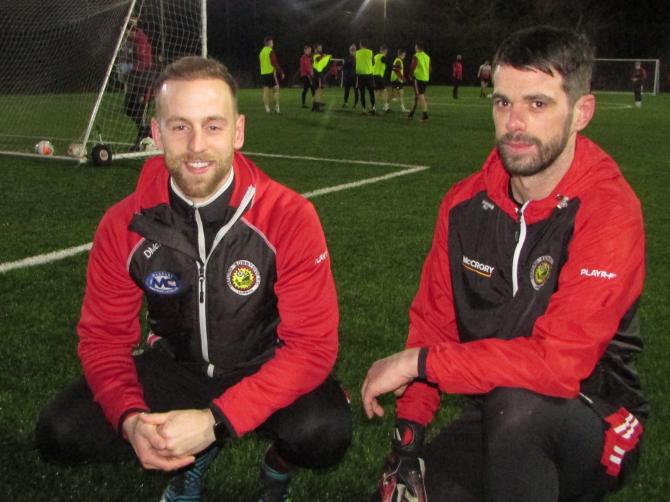 Two of the players who have witnessed big days at Windsor Park for very different reasons took part in Oxford/Sunnyside's last training session before the Lurgan club face Linfield in Saturday's Irish Cup.

Both Conor McCorry and Deckie McVeigh were part of Colin Malone’s Lurgan Celtic side which played the Blues in the semi-final back in 2016.

The stories surrounding their contributions are well known, as Conor McCorry explains.

"That was a fantastic year for Lurgan Celtic but unfortunately I was serving a suspension for being sent off in a league game, so I missed the semi-final.

“The club had exhausted all the ways they could of trying to get a hearing before the game but instead of taking part I had to be content with a seat in the stand."

McVeigh, who captained Celtic to their quarter-final win over Portadown in 2016, said that the current Oxford team have plenty of experience to bring to the table against Linfield.

He added, "Myself and Adam Rodgers have both played at Windor Park in big games, and we have Peter McCann who has won Irish Cup medals in the past.

“It's all about having a great day out for the fans but also to do ourselves justice on the day.”

The uncompromising midfielder continued, "Whatever happens on Saturday, the club are making huge strides.

“You only have to look at the numbers of kids attending training sessions. It's fantastic.

“Patrick (McCrory) has put a fantastic amount of effort as have all the members and players, so we hope the fans enjoy the day.

“We will be certainly be going to Windsor Park to put our best game out there and see where it takes us."

With former Portadown midfielder Sean Mackle now with the club, Oxford will be looking for good performances from the classy Caolan Skelton, and top operator Jordan Bell.

While they are rank outsiders, the Lurgan men have a huge tradition in big games and are creating history by contesting an Irish Cup game at this stage for the first time.