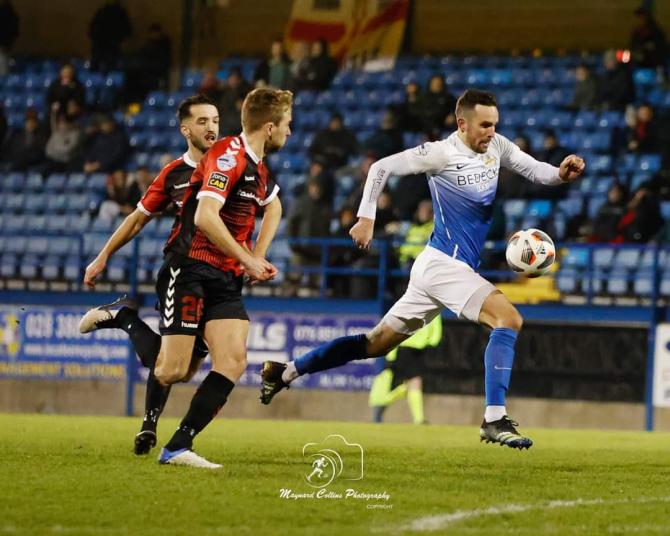 Andy Waterworth breaks through for Glenavon against Crusaders.

Glenavon exited the Samuel Gelston Irish Cup in controversial circumstances on Friday night.
Referee Tim Marshall had a big role to play in the game, making a number of big decisions throughout the game which will have left Glenavon boss Gary Hamilton feeling aggrieved.
There was a surprise in the Glenavon lineup when Paddy Burns was named in the starting XI. The Lurgan Blues had kept hold of Burns’ registration when he had gone to America.
Goalkeeper James Taylor came to the rescue with a fine save, pushing away a Paul Heatley shot after a great cross from Ross Clarke on four minutes.
But just moments later the Crues took the lead through Jordan Forsythe, who was afforded too much space to carry the ball in from the left and shoot from 20 yards out.
They could have had a second when Clarke got past Michael O’Connor and had a crack at goal, but fired wide.
There was called for a Crusaders red card when Burns was bundled over on the edge of the box, but the referee waved play on.
Minutes after the restart Glenavon thought they had pulled level when Matthew Snoddy turned in a Conor McCloskey cross, but the goal was ruled out for an offside. However, replays suggested that Snoddy was behind the ball when the cross came in.
They had the ball in the net again but a second offside was given, this time when a deflected James Singleton shot was tipped onto the post before being turned in.
Of course, Sod’s law, Crusaders went and scored a second shortly afterwards when Paul Heatley beat the offside trip, rounded Taylor and slotted the ball into an empty net.
The game was all but over as a contest on 67 minutes when Ben Kennedy finished a great Crusaders break with a fantastic finish, curling the ball around the goalkeeper.
And 11 minutes from time the Crues found the net again with a good finish from Heatley, but it looked as though he had been offside when the ball was played through. Replays also showed that there had been a handball by a Crusaders player at a Glenavon corner just before the goal was scored.