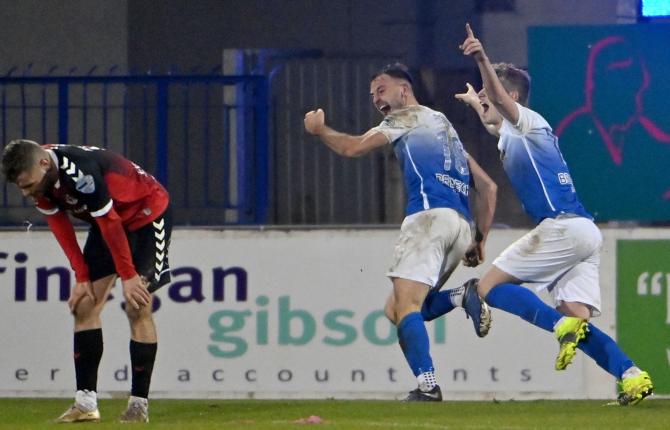 Two second half stoppage time goals earned Glenavon a point which, being honest, they probably didn’t deserve against Carrick Rangers.

Trailing 2-0 with 90 minutes on the clock, a cool finish by Matthew Snoddy and a Matthew Fitzpatrick header earned the Lurgan Blues a share of the spoils.

Earlier Ben Tilney and Jordan Gibson had put the hosts into a lead that they didn’t look like losing.

The first half was a fairly dull affair with the first chance not arriving until the 28th minute. Andy Waterworth challenged for a high ball, getting there as it landed on the ground. He turned the goalkeeper and got a shot away which took a deflection and came back off the post for a corner.

It was Carrick who took the lead on 34 minutes when Tilney fired the hosts in front. He bombed down the left hand side, getting into the box and firing a shot at goal which seemed to be helped in by a bobble on the ground.

They could have had a second when Glenavon were caught out as they attacked a corner. Lloyd Anderson carried the ball out of defence as Glenavon were left two on one. He found Gibson but his low shot was easy for James Taylor - the Donaghcloney man will be thinking he should have done better with his effort.

Glenavon looked to level through Andrew Doyle on 40 minutes with a powerful drive from 30 yards out. He was teed up by a short free kick from Michael O’Connor, but Doyle’s shot was well saved by Neil Shields.

Shields came to the rescue again when Waterworth got a glancing header on a Mark Haughey cross. The goalkeeper was at full stretch to parry the ball away, just as the game entered first half stoppage time.

James Singleton saw a header cleared off the line and Matthew Fitzpatrick headed over from successive O’Connor corners four minutes after the restart.

On 70 minutes the away support thought their team had levelled when substitute Josh Doyle had a low shot with his first touch of the game. However, the ball rolled around the post and hit the side netting.

If Gibson was disappointed with how he missed his opportunity in the first half, he more than made up for it on 75 minutes. Once again Glenavon were caught as they attacked a corner, with Danny Wallace left to deal with four Carrick attackers. The ball was squared to Gibson about 12 yards out and he made no mistake this time around.

Glenavon pulled a goal back two minutes into stoppage time when a high ball by Wallace was knocked down in the box and turned into the net by Matthew Snoddy.

And a minute later they grabbed an unlikely equaliser when a free kick by O’Connor was was headed in by Fitzpatrick.