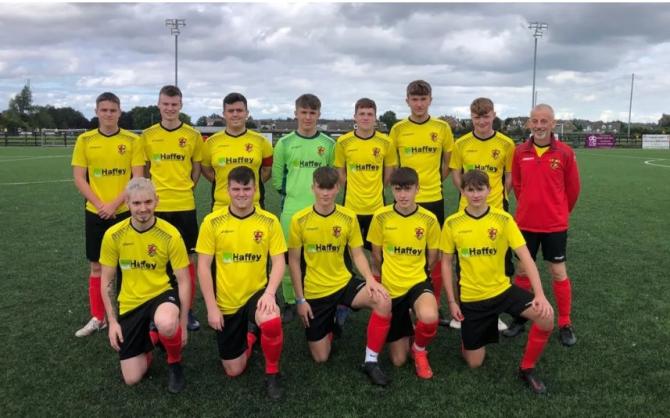 Lurgan Town’s Swifts squad travelled to Kernan in Portadown on Saturday to play relegation rivals Ambassadors Reserves in a game which the Swifts needed to win.

However, after Lurgan had dominated the opening 15 minutes of the game, they somehow found themselves 4-1 down at half time.

Ambassadors’ first goal was well hit but should have be closed down. Goal number two came from a poor pass out from Scott S which allowed the Ambassadors player to lob Scott from distance.

A third goal followed poor defending from three Lurgan defenders, which allowed an Ambassadors player to wriggle through to score with another good finish.

Finally, a poor reaction to a corner allowed Ambassadors player to score.

Lurgan managed to score from a Chris Agnew pass over the defence which Callum W to lob the advancing goalkeeper to score.

Ambassadors had five shots in the half and scored four times while Lurgan’s composure and decision making was questioned during the half-time talk.

With a stern team talk ringing in the Swifts players’ ears, they knew they needed to improve all over the pitch to get something from the game.

The Swifts were camped in the Ambassadors half for at least 80% of the 45 plus minutes.

Lurgan got back to 4-3 via two penalties with both Callum W and Adam Leathem being fouled. Lewis McKinley calmly scored the first and he passed on the second to Andrew Houston to score his 100th senior club goal.

During the final 20 minutes the Swifts bombarded the Ambassadors goal but numerous chances went begging, especially from Callum W and a couple from Housty. Spencer Young had a great chance to salvage a point but hit wide from five yards.

This was a disappointing score line for the Swifts in a game they should have won comfortably, but credit to Ambassadors as they capitalised on Lurgan’s defensive errors plus poor finishing.

There were some good performances for the Swifts coming from Davy Trainor and sub Aidan Quinn. Fourteen-year-old Jamie Trainor also got another 20 minutes of senior football.