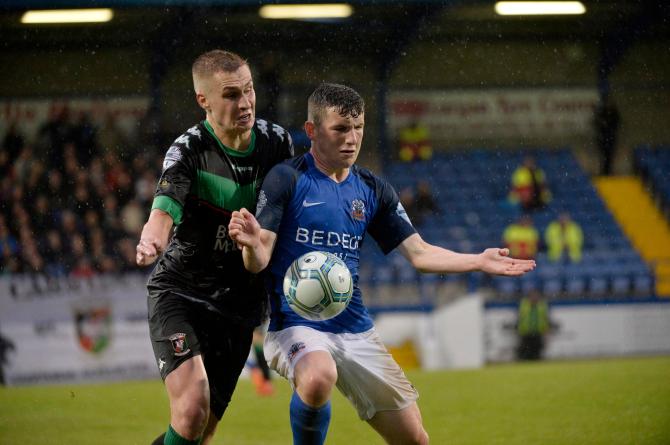 Bobby Burns, pictured in his Glenavon playing days against Calum Birney, then of Glentoran but now a favourite with the Lurgan Blues faithful.

Gary Hamilton’s influence on younger players has been hailed by one of his former protégés.

Bobby Burns became a star at Glenavon before joining Hearts in 2018.

Now at Glentoran, he has been speaking about his time at Glenavon during an interview with the Northern Ireland Football League.

He explained how he came to join the Lurgan Blues.

“When I was younger, I played Gaelic from the age of four until twelve as well as football with Crumlin United,” he said.

“I had a year with Lisburn Youth but a librarian at my school was a coach at Cliftonville so I went there and we had such a successful team and won numerous trophies.

“At that time, Cliftonville didn’t give many opportunities to young players and Glenavon came in, with Gary Hamilton promising me that I would train with the first-team and play with the Reserves.

“I accelerated through the ranks and I had a great six-month loan spell at Knockbreda which really helped me as I entered a man’s changing room and I managed to score eight goals in eight games under Gareth Scates.

“We were bottom of the table when I joined but we beat Armagh City on the final day of the season to stay up and I netted twice, so it was definitely a move I needed at that time.

“When I went back to Glenavon, I probably went from a young prospect to a first-team level player and I was fortunate that Rhys Marshall was suspended for the first game of the season as I scored in a 3-2 win against Warrenpoint Town, before scoring against Ballymena a week later.

“That first full season as a first-team player was a memorable one as we finished third in the table, qualified for Europe and I was named as the Glenavon Young Player of the Year.

“We had a great mix of experienced heads with the likes of David Elebert, Kris Lindsay and Jonny Tuffey combined with youthful talent such as Mark Sykes, Rhys Marshall, Joel Cooper, Josh Daniels, James Singleton and Caolan Marron.”

Burns’ performances at Mourneview Park wouldn’t go unnoticed as he made the switch to Heart of Midlothian in 2018 – citing boss Hamilton as a major influence in his career early in the game.

A six-month loan spell would also see the 22-year-old end up at Livingston, as well as a year at Newcastle Jets in Australia.

“Gary was very good with young players as he gave you confidence and kept you in the team despite if you made a mistake,” he added.

“It was a busy time for me before moving to Hearts as my mum wasn’t well and I was doing my A-Levels.

“I could have moved to Rochdale or Bristol City a few years previous but I wanted to finish my studies and I knew if I performed, then I still had a chance of making it.

“The Hearts interest felt like the right time to move and I remember flying over to Edinburgh praying Coleraine would beat Cliftonville in the Irish Cup so I could seal the switch and not have to risk an injury in the European play-off.

“Hearts is a massive club with a great stadium and I managed to play ten games before moving to Livingston on a six-month loan where I made eight appearances.

“Livingston was a great experience as they played a different style of football but they always did enough to stay up and they had a good work ethic.

“I returned to Hearts in January 2019 and played in an Edinburgh derby and a Scottish Cup semi-final which were unforgettable experiences. I was meant to come on in the final against Celtic but unfortunately Odsonne Edouard had different ideas as he netted a last-minute winner.

“I went on loan to Newcastle Jets for the 2019/20 campaign and I thoroughly enjoyed it and I was playing with the likes of Joe Ledley and Wes Hoolahan.

“I played every week, enjoyed a great lifestyle and it has certainly whetted my appetite of playing football abroad again in the future.”

You can read the full interview by clicking here.