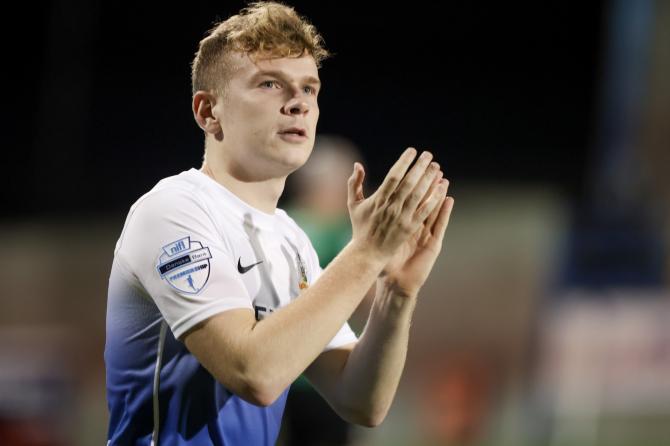 Glenavon moved four points clear of Ballymena United in the race for the final European play-off spot with victory over the Braidmen at Mourneview Park.

A Peter Campbell brace and a Calum Birney header offset a Kym Nelson goal which had given the visitors the lead.

The Sky Blues took the lead midway through what had been a scrappy yet end-to-end first half, and in controversial circumstances too. Glenavon should have been awarded a corner when Kym Nelson headed the ball out under pressure for Matthew Snoddy, but referee Jamie Robinson awarded a goal kick. Snoddy was booked for his protestations.

From the resulting goal kick United won a free kick, which was whipped in towards Nelson. His header was out of the reach of Glenavon’s new goalkeeper, Josh Clarke, and nestled in the net on 25 minutes.

If United’s goal was contentious, the Lurgan Blues’ was arguably just as controversial. A free kick by Conor McCloskey was headed goalward by Calum Birney at the back post. United contested that the ball hadn’t crossed the line, however it appeared it had indeed gone over and referee Robinson awarded a goal.

Glenavon introduced James Singleton after the break in place of Jack O’Mahony, and the captain almost put his side in front with a header from a corner, however it was wide of the mark.

United were awarded a penalty on 55 minutes when Mickey Place went down under pressure from Danny Wallace, who received his marching orders. Replays seem to suggest that it may have been Calum Birney who committed the foul. They need not have worried though, as Clarke came to the rescue, saving Leroy Millar’s penalty.

With around 15 minutes to go the Lurgan Blues got in front thanks to a Peter Campbell thunderbolt from the edge of the box.

And a couple of minutes later he bagged a second, controlling a pass by Matthew Snoddy before slotting home.

They could have had a fourth when Conor McCloskey dragged the ball past a defender inside the box before getting a shot away which he pulled wide of the mark.

The visitors had Leroy Millar sent off for a second yellow card offence in stoppage time after he fouled Robbie Garrett.