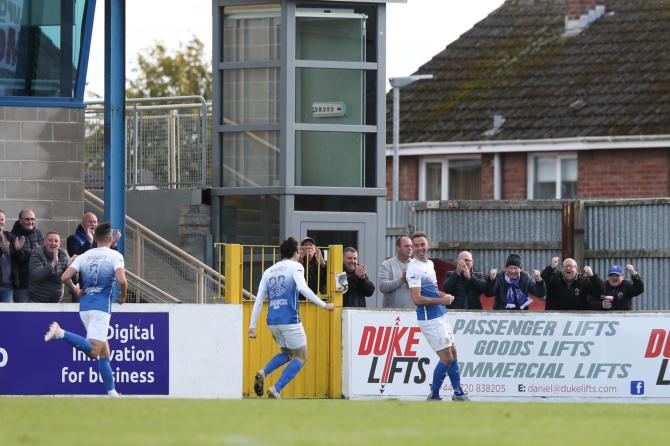 Gary Hamilton has praised his Glenavon side for their recent “excellent” performances.

The Lurgan Blues have lost just two games since a pretty dismal January period, with only title challengers Glentoran and Larne able to defeat the Mourneview men.

“I’m sure everyone will agree that we have been good over the last period. Even in the games that we’ve lost we have competed, for example against Cliftonville we competed well but it just wasn’t to be on the day,” he added.

“Looking at the bigger picture in those games and, particularly in the second half against Ballymena last week, I think we have been excellent.”

That win over the Sky Blues last week and the continuation of that recent good form has led to Hamilton calling for more of the same in today’s game against Dungannon Swifts.

But he is under no illusion that the teams beneath Glenavon and United still have plenty to play for and expects the Swifts to put up a fight.

“The rest of the teams that we play between now and the end of the season are all fighting to stay clear of that relegation play-off,” he said.

“Everybody has something to play for now. For ourselves and Ballymena it’s the European play-off and the rest of the teams have relegation concerns.

“These next few games will be as tough as any of the rest we have played this season, but if we can keep playing in the manner that we did against Ballymena last week and as we have been playing over the last couple of months we will have a chance against anyone.”

Glenavon will welcome Michael O’Connor and Andrew Doyle back into their squads, however Andy Hall and Jamie Doran miss out through injury while Andrew Waterworth has a chest infection.

Saturday’s game kicks off at 3pm.