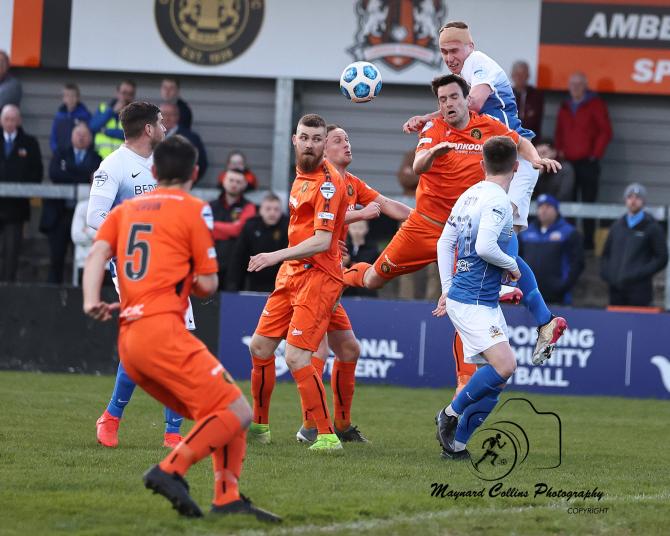 Glenavon are one step closer to a place in the European play-offs after a scrappy victory over Carrick Rangers.

It took a late Michael O’Connor goal, which to be honest was the only real moment of quality in the game, to separate the sides and move the Lurgan Blues four points clear of Ballymena United in the race for seventh.

That’s because the Sky Blues suffered defeat to Warrenpoint Town - although their win wasn’t enough to save them from relegation.

The first chance of the game fell to David Cushley but luckily for Glenavon his 10th minute effort fell for him on his weaker right foot and went over the bar.

Five minutes later Matthew Carson chances his arm from distance but Josh Clarke was able to stop his effort from 30 yards.

Alex Gawne also came close with a rasping effort from the edge of the box but again Clarke did well to get down and save.

Glenavon’s chance came with less than 10 minutes to play in the first half. A dangerous cross from Sean Ward missed the outstretched foot of Mark Haughey right in front of goal but found Calum Birney at the back post, however he was unable to get his sidefooted effort on target.

Moments later Peter Campbell played Matthew Fitzpatrick through on goal but his low shot was saved by Aaron Hogg. There’s an argument that Glenavon should have been awarded a foul as Fitzpatrick was brought down as he was taking the shot, but referee Christopher Morrison disagreed.

The visitors were unlucky on 50 minutes when Ward did well to cross for Birney but his header was straight at Hogg.

Birney was caught out as the second half wore on when a long ball found Emmett McGuckin, but he blasted over.

Fitzpatrick’s glancing header with 10 minutes to go from an O’Connor free kick almost had Glenavon in front, however it went narrowly wide of the mark.

Two minutes from time Glenavon were awarded a free kick when Jack O’Mahony was fouled outside the box. O’Connor stepped up and curled the resulting free kick into the top corner.