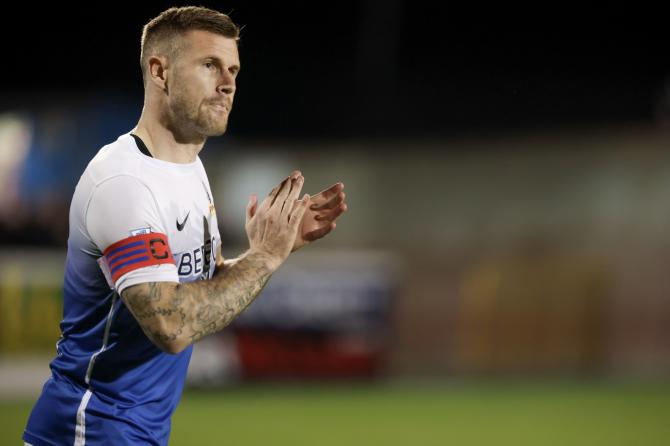 If the Lurgan Blues equal or better Ballymena United’s result on Saturday then they will seal the final European play-off spot by virtue of finishing seventh.

However, the Ports also need a win and hope that Carrick Rangers lose to Ballymena United in order to keep their hopes alive of escaping the relegation play-off.

That game would be against the team which finishes second in the Championship – currently their very near neighbours Annagh United.

“It’s a massive game for everybody, even for them because they’re fighting for their lives down there,” the former Northern Ireland international told Glenavon Media.

“We need to go into the game in the same way that we did against them not that long ago – in the first half we were brilliant against them.

“But it’s not going to be an easy game. It’s a derby so form and everything goes out the window so we need to roll our sleeves up, win the battles first and foremost and hopefully we’ll come through.”

Glenavon restored a four-point gap over the Sky Blues on Tuesday night after beating Carrick, with O’Connor scoring the winning goal two minutes from time.

“There wasn’t very much in the game. I thought it was very scrappy,” he conceded.

“It was going to take something half-decent to win the game and I fancied myself and stepped up.

I think I scored a similar goal against Portadown from a similar range.

“It’s a great result. When you come down here you have to battle hard and get a bit of luck sometimes and we got some of that.”

The former Scunthorpe, Rotherham United and Lincoln City man was one of several players to agree a new deal to stay at Mourneview Park, signing a one-year contract.

“Moving back, I had found it tough with the move from full-time to part-time. But the lads are great so I’ve found it easy transitioning.”