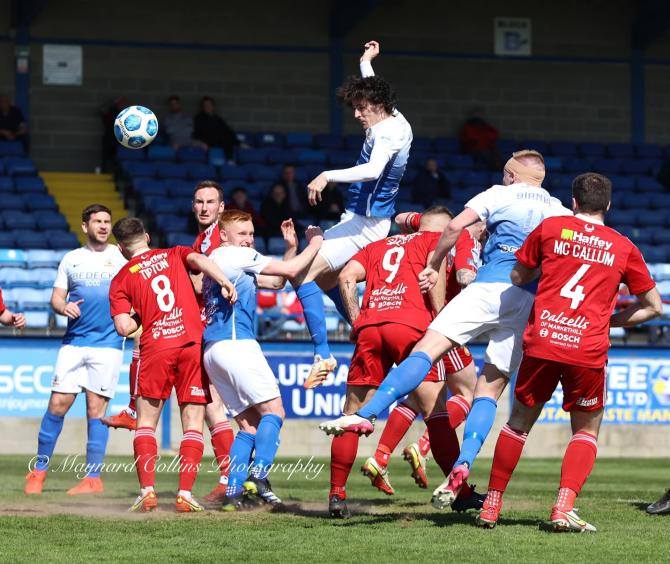 Glenavon secured seventh spot and a place in the European play-offs after seeing off Mid-Ulster rivals Portadown at Mourneview Park.

Their win keeps them four points ahead of Ballymena United, and with just one game left to play it means that the Lurgan Blues can not be surpassed.

It was a game which was devoid of any real chances, however with bragging rights staying in the blue half of Craigavon, the Glenavon supporters will be happy just to have the win.

Early chances fell to Portadown’s Adam Salley and George Tipton, but their efforts were high and wide of the mark respectively.

But 14 minutes in Glenavon went in front through a Danny Wallace header from a Peter Campbell corner, with the Ports defence left static.

Salley went close again on 19 minutes with a low driven shot, however Josh Clarke got down low to save.

Matthew Snoddy shot over the bar on 35 minutes from outside the box as Glenavon piled the pressure on the Ports defence.

Wallace came to the rescue twice to deny the Ports two minutes after the break. Clarke did well to parry away a Salley cross, but the ball fell to the visitors who had chances blocked twice in quick succession by Wallace.

On 55 minutes Gary Hamilton was booked by referee Ross Dunlop following his protestations when Matthew Snoddy went down in the box. The Glenavon manager felt his side should have been awarded a penalty but the man in the middle disagreed.

With 20 minutes to go Matthew Fitzpatrick curled a shot over the bar as Glenavon looked to seal their win. Portadown, on the other hand, had virtually stopped playing.

Defeat for the Ports means that they are now consigned to the promotion/relegation playoff, where they will meet neighbours Annagh United.