Glenavon's Danny Wallace: 'We fancy our chances in play-offs' 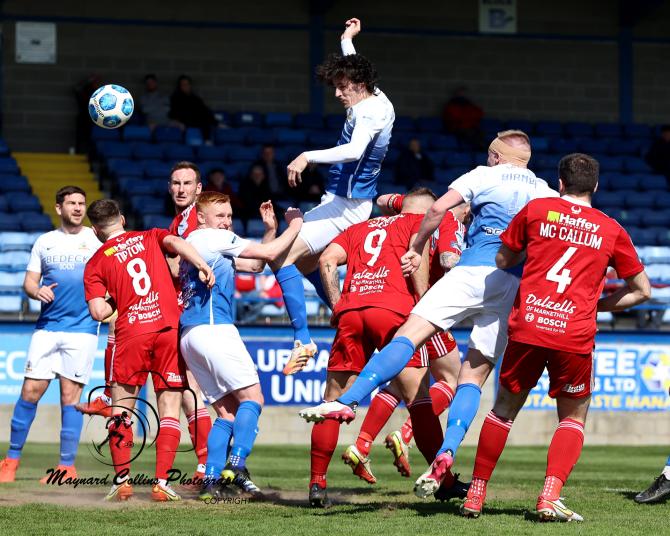 Danny Wallace says Glenavon will fear nobody as the club heads into the European play-offs.

The Lurgan Blues will finish in seventh place in the league, meaning they still have a shot at qualifying for the Europa Conference League.

Wallace, who has been named as the Triangle Supporters’ Club’s player of the season, scored the winning goal on Saturday against Mid-Ulster rivals Portadown – his first for the club.

“I had scored one at Dungannon just before Christmas but I think Andy (Waterworth) has claimed that one off me!” he joked while talking to Glenavon Media.

“But I was happy to score and get the three points, that was the most important thing.

“It wasn’t a game of too much quality, I think that the goal was probably the only bit of quality in the game.”

He added, “Before the game we were talking about how we would attack corners and there were four of us going up. So I said to Singy (James Singleton) that I would go round the back for the first corner – I think the one we scored from was our second.

“I just decided to run into the middle and thankfully I got onto the end of it and it’s ended up in the net!”

Glenavon now face a wait to find out who they will play in the play-offs. If Crusaders win the Irish Cup then they will play Glentoran at the Oval, but should one of Ballymena United or Newry City win it then they will have to play sixth placed Coleraine at the Showgrounds first, with the winners playing the team which finishes third in the table. That could still be Crusaders, should they win on Saturday against Larne and Glentoran lose to title-chasing Cliftonville on the final day of the league season.

“We’ve played really well against all of the teams in the play-offs so we’ll fancy our chances,” Wallace added.

“In those games we probably haven’t got the results that we deserved.

“It’s a lottery. It all depends on who wins the Irish Cup, but we would like to go straight into the semi-final.

“First of all we have a match next week against Warrenpoint and hopefully we can get a win and take a bit of confidence going into those play-offs.”