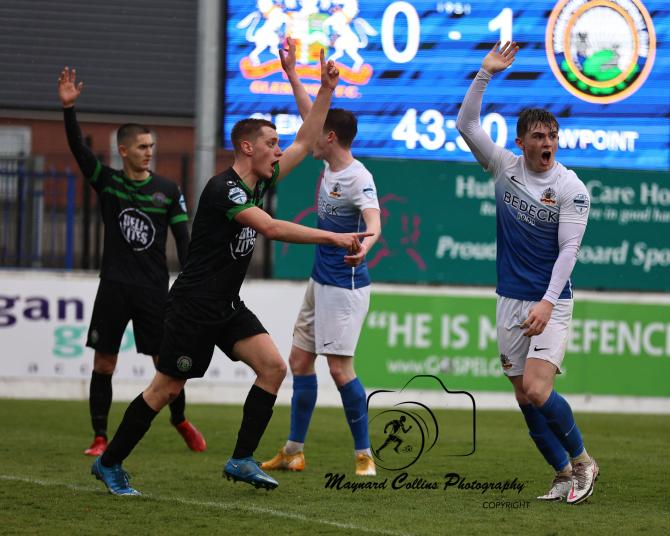 A goal with what was virtually the last kick of the 2021-2 league campaign at Mourneview Park consigned a young Glenavon side to defeat against relegated Warrenpoint Town.

Just as he said he would do, Gary Hamilton gave some of the players who had been on the fringes of the starting XI a game, with a number of the club’s U18s getting a seat on the bench ahead of the Harry Cavan Cup final at Windsor Park on Wednesday.

It took 15 minutes for the first chance of the game to come. Adam Wixted jinked past a Glenavon defender before shooting from 20 yards out, but his shot was deflected for a corner.

Joshua Wilson gave the visitors on the half-hour mark, holding off skipper for the day Andrew Doyle before finishing low into the bottom corner.

Conor Scannell let fly for the Lurgan Blues two minutes later with a half-volley from 20 yards out, but his effort was wide of the mark.

Five minutes before the break Luke Wade Slater burst forward for Warrenpoint and his low cross ended up with Steven Ball, but Glenavon goalkeeper Josh Clarke did well to come out and block his shot.

Glenavon levelled through Josh Doyle on the hour mark when Warrenpoint tried to play the ball out from the back. However the ball broke for the striker and he placed his shot into the bottom corner past Conor Mitchell.

However the winning goal came in with the final kick of the game and went the way of the visitors. Alan O’Connor found the bottom corner of the net, finishing off a well worked move by the visitors.

Glenavon’s focus now turns to the European play-off matches and now face a wait to find out who they will play.