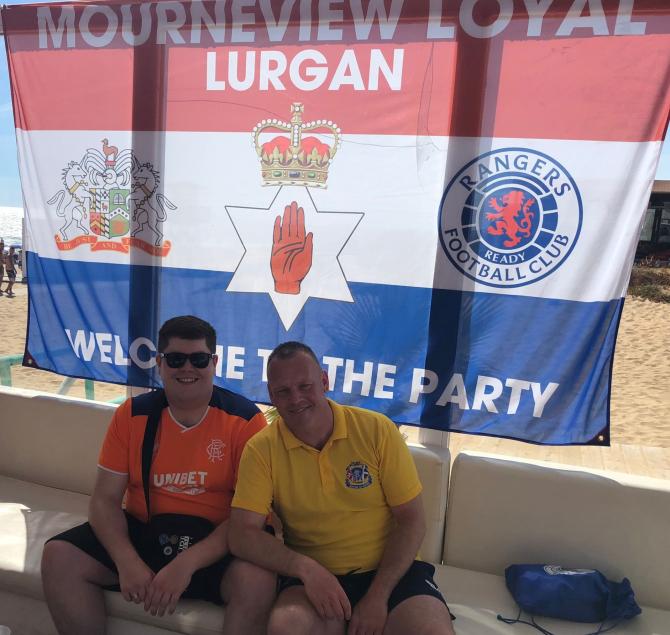 Rangers fans from Lurgan are preparing for one of the biggest games in the club’s history tonight.

Around 100,000 supporters have made the trip to Seville to see their team take on Eintracht Frankfurt in the Europa League final.

Their number includes a fair few fans from our part of the world, including Jeff Magee.

He has been staying in the town of Punta Unbría, halfway between the Portugese border and Seville.

“It’s lovely here, you could definitely bring the family here for a holiday,” said Jeff, who was speaking to Your Lurgan before heading off to the game.

“It’s a bit like Portrush for the Spanish but up a notch!

“We stayed in Faro on Sunday night and came across here on Monday, at which stage it was really quiet. By Monday night there were bus-loads of people arriving here and since then the atmosphere has been amazing.”

Jeff is amongst a group of eight pals over for the game. Only two of them have tickets, with Jeff being one of the lucky ones to get a seat inside the Ramón Sánchez-Pizjuán Stadium.

He should have been at the final the last time Rangers reached this stage of the same competition when it was known as the UEFA Cup, when thousands descended on Manchester.

However, he had to give up his ticket for that game due to the minor matter of being on honeymoon.

“I wasn’t missing this one,” he joked.

“I know how lucky I am to have a ticket for this one.”

Jeff added, “The atmosphere has been excellent, really good natured. We all got together in a beach club and had a party, it was brilliant.

“It’s great because it’s probably the first time a lot of people have been away since COVID. Just being able to go away, see old friends and have a beer with them has been amazing.

“Tom Stoltman, the World’s Strongest Man, is a big Rangers fan and he’s staying in the same place as us. We saw him out and about yesterday – what a gentleman he is.”

As for the match itself, Jeff reckons Giovanni van Bronkhorst’s team can be “quietly confident” of their chances tonight.

“We’ve already put out two German teams who are higher up the league than Frankfurt, but we need to turn up.

“They are a good team. They’ve beaten Barcelona and West Ham so you can’t say it’s going to be easy but we’ve got a big chance if we turn up and play the way we can play.”

Anyone who wants to see the game but hasn’t been able to get to Seville can watch the game tonight on BT Sport 1 or for free on the BT Sport YouTube channel, with kick-off at 8pm.