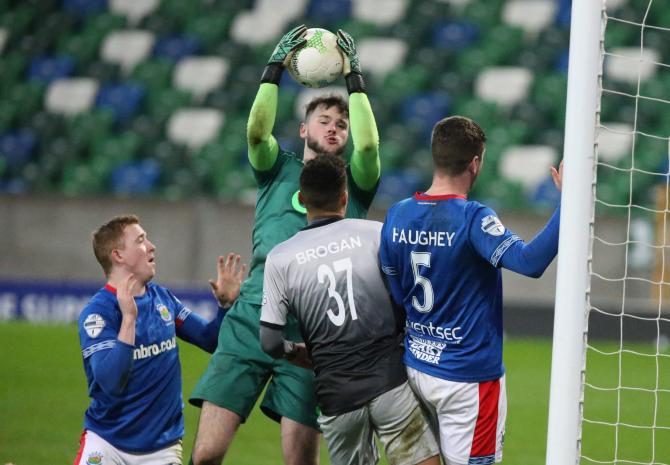 Rory Brown hopes his summer move to Glenavon will help him bank even more career appearances.

The shot stopper joined the Lurgan Blues on a three-year deal from Glentoran to become Gary Hamilton’s first arrival in the summer transfer window.

Subsequently, Conor Kerr and Sodiq Oguntola have also joined the ranks at Mourneview Park as Glenavon look ahead to the 2022/23 campaign.

Speaking to Glenavon Media, Brown spoke of his excitement at getting underway with his new employers.

“It has been the worst kept secret but I’m just glad to get in for pre-season.

“It has been a long time coming as I nearly joined last season but I had a loan spell at Ballinamallard United.

“However, I’m happy to have got everything signed on a three-year deal and I’m looking forward to get going.

“It’s going to be tough but I can’t wait to get the season rolling.”

Brown, who was also on the books at Coleraine for a short spell, remarked that he will have to get to know his new team-mates in the coming weeks.

“It’s been good but obviously tough like every pre-season,” he added.

“The first session is always the hardest and I can’t wait to get rolling.

“I actually don’t know many of the lads here.

“Obviously I knew Jack [O'Mahony] but he has since moved on.

“I’m excited to get to know a few of them and Gary Hamilton as well.”

Glenavon narrowly missed out on a place in the top six last season and Brown has targeted going one better this time around.

The custodian also reflected on his career to date that saw him go to England at the age of 15.

“We should be aiming for the top six, get a good cup run going and see how many wins we can get under our belts,” he continued.

“When I was 15-years-old, I moved over to Wolverhampton Wanderers on a scholarship before returning back to Derry at 19, where I had a bit of a knee injury.

“It didn’t really work out, signed for Institute and had a good season there before joining the Glens two years ago.

“I didn’t get the full experience there due to COVID, played 15 or 20 games and then went out on loan to Ballinamallard, which was a good experience as I played over 30 games.

“Now that I’m here, I want to enjoy another full round of games and see where it takes me.”