New Glenavon signing Bradley insists 'age is only a number' 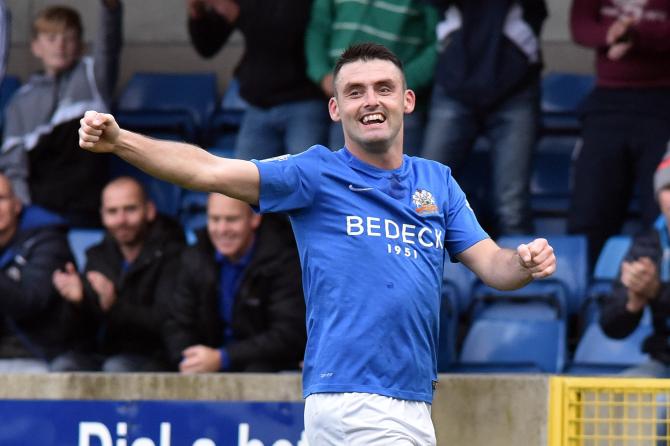 Eoin Bradley celebrates scoring for Glenavon during his previous spell with the club. Picture: Presseye

Eoin Bradley believes that he still has plenty to contribute after joining Glenavon last night.

The 38-year-old was released last week by Coleraine but Lurgan Blues boss Gary Hamilton has moved quickly to snap up the striker.

And while eyebrows have been raised in some quarters about why the boss is bringing the veteran forward back to the club due to his age, Bradley himself feels fit and ready to go.

Speaking to Glenavon Media, Bradley said: “I’ll give anyone as much bother as they want. Age is only a number and as Gary said to me, if you’re playing well then you’ll get to play.

“I’ll not be expecting any favours from anybody.”

Glenavon are a club well used to taking a punt on what some might term as ‘veterans’. Hamilton pointed out that that Winkie Murphy played at Glenavon until he was 40, Sean Ward is still playing at a similar age while the gaffer himself was still throwing himself into games at 38-39 years of age.

Asked if he felt he had a point to prove, Bradley responded: “I do and I don’t.

“There’s no hard feelings with Coleraine. With the way they’re going to be playing you probably don’t need as many strikers. Once Gary gave me the opportunity to come here I jumped at it and I’m looking forward to getting started.

“I’m delighted to be back and to get it over the line. It got sorted brave and quickly to be honest with you.

“When I was released by Coleraine I had two or three offers but once I had spoken to Gary I had my mind made up.”

This is the former Derry GAA player’s second spell with the club, having previously with the Lurgan Blues between the 2014-15 and 2016-17 seasons.

He won an Irish Cup medal in 2016 when he formed a formidable partnership with Kevin Braniff and played in Europe in each of the three seasons that he spent with Glenavon.

Bradley also inadvertently helped us qualify for the Europa League in 2018-19, when his stoppage time goal for Coleraine helped the Bannsiders win 2018 Irish Cup final. Thanks to Coleraine winning the Irish Cup, Glenavon qualified for Europe through their league placing.

Having signed a one year deal with the option of a second year, ‘Skinner’ says he can’t want to get back into action, adding he was pleased to see a few familiar faces.

He added: “I know a few of the boys already and I was in a meeting with Adrian [Teer] and Fraser [Follis] who I know from my last time here. If I can be as successful as I was the last time I was here I’ll be happy enough!

“There’s good quality in the squad. We played Glenavon two or three times last season and they beat us easily enough, so there’s definitely quality in the changing room. Hopefully I’ll add to it and hopefully we’re in for a good season.”

Glenavon boss Hamilton said, “Skinner was a big part of our success during his time at the club so I’m pleased to have him back on board with us.”
“I know he will be a huge asset to the changing room. Eoin will bring a wealth of experience and will give us something different as we head into the new season.”