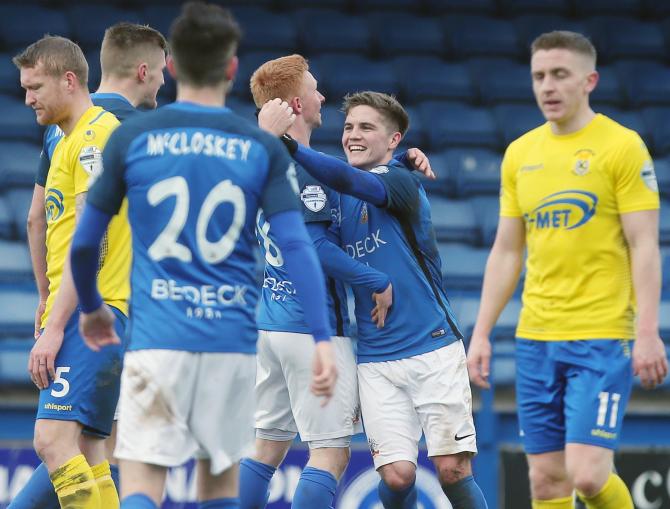 Former Glenavon midfielder Josh Daniels has been speaking in glowing terms about his time at the club following his move to Welsh club The New Saints.

Daniels, 26, left the Lurgan Blues in 2020 to join Shrewsbury Town. However, in May, the Derry man said that he was leaving Salop.

He hasn’t moved far though, with TNS’s Oswestry base just a few miles down the road from the New Meadow.

The ex-Derry City man told TNS’s website that he feels he played his best time at Glenavon.

Asked about what the differences were between the Irish League and the League of Ireland, Daniels said: “When I was with Derry City our style saw us playing with wingers and a 10 – it was sort of modern football back then. It was probably more technical and not as direct as the Irish League.

“Another reason why I felt I had to go to Glenavon was because I felt I had to add to the other side of my game. I was always the technical winger or the tidy player but I never really got tested physically, or with long balls or with second balls.

“We played 4-4-2 with Glenavon and I was a left midfielder rather than a left winger, so I did both jobs. I was always helping out the full-back and getting forward when I could. We played with a high energy.

“Glenavon were very good to me. They knew what my goal was, that I wanted to go to England or Scotland and that I had ambitions. It was a move that worked out for me.

“I wasn’t really happy with my numbers there. I’ve never really had a season where I’ve had massive numbers. I know for a lot of people football is based on stats now but for me, I played my best football so far there because I enjoyed myself. I think that for my performances alone that was why I got a move into the English Football League.”

“We were massive underdogs, obviously, being a part-time club. We went out with no fear and won 2-1,” he said.

“Luckily for me, I grabbed the winner. It was the biggest game to date in my career, not just for playing in Europe and scoring the winner, but it was my daughter’s first ever game watching me play. It’s something I’ll never forget.”

You can hear more of what Josh had to say by pressing play below.