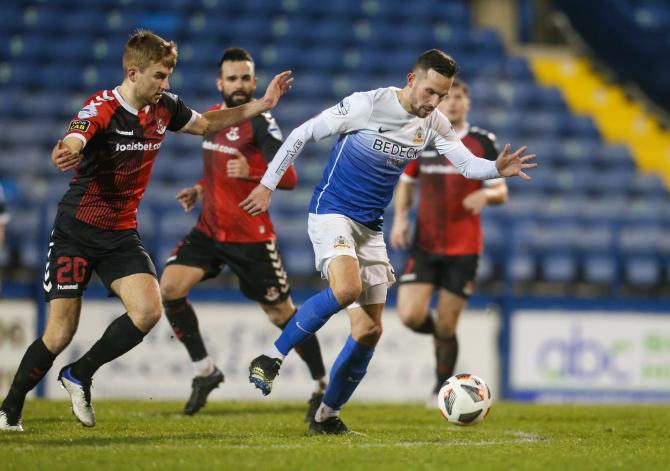 Andrew Waterworth has thanked Glenavon’s fans for their support following his decision to retire.

One of the best strikers of the Irish League’s modern era, the ex-Glentoran and Linfield striker scored three goals for the Lurgan Blues during his brief spell at Mourneview Park.

However, the striker, who coaches Northern Ireland’s U17s and U19s, says that he was disappointed that he couldn’t contribute more during his time at Glenavon.

“I knew halfway through the season last year that with my new job and work commitments that it just wasn’t viable to fully commit to the club,” he told Glenavon’s official website.

“If I couldn’t give 100% then I was doing myself short and I was leaving the club short too because I wasn’t giving them everything, which didn’t sit well with me.

“I tried to hold out until the end of the year because I didn’t want to leave the club or the manager a player short during through the season, which would have left them with little cover.

“I genuinely want to thank the club and my teammates. It was a great changing room and I’ve met friends there for life.

“The Glenavon fans were good to me, even though performances were below par. I can remember one particular occasion where they gave me a good reception away to Larne and I hadn’t been playing well.

“I’m disappointed I couldn’t contribute more on the pitch, but an opportunity came up in my own professional career that I couldn’t turn down and it meant that I just had to give that my all.”

Waterworth’s professionalism was second to none, according to Glenavon boss Gary Hamilton.

“It was a disappointment for both of us because we were looking to get Andy at his best but unfortunately he got COVID at the start of the season, which turned into long COVID.

“He also got a promotion in his job, meaning he was away for weekends with the Northern Ireland U17s and U19s, which hampered him as well.

“Through it all he was also looking after his mum who was sick and unfortunately passed away during that period, so it was one of those bad years for Andy in every aspect of life. In terms of his career with us, it just wasn’t to be.”

Hamilton added, “I want to congratulate him on an unbelievable career. He’s been a great servant to Irish League football and is a legend of the league. He’ll always be remembered in Irish League circles, especially at Linfield Football Club.”