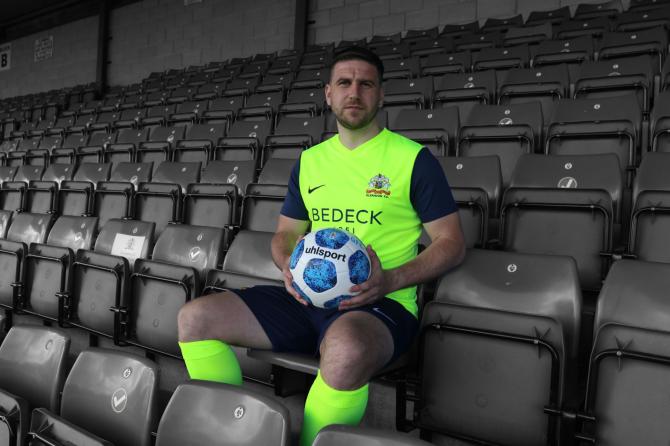 Glenavon have surprised fans with their new yellow away kit.

Quite a number of fans were expecting the club to unveil a white shirt after the club released a grey-scaled teaser at the weekend.

However, it now appears that it was a bit of computer trickery.

The launch video, which was released by the club this afternoon (Thursday), started with black and white footage of a player putting on the new shirt.

But when the player takes to the pitch, the footage flashes to colour to reveal the bright yellow shirt. It also has navy sleeves, navy shorts and yellow socks.

Fans have been giving their reaction to the new shirt – and it’s fair to say that reaction has been mixed.

One who liked it said it was “an unusual shade of orange”, a reference to the fact that this is the first time Glenavon have moved away from an orange away kit since the 2013/14 season.

Another described it as “bright” while someone else said that “Florescent football shirts are horrific”. It has even earned the praise of a Portadown fan!

Supporters will be able to get their hands on the new shirt from 6.30pm this evening from The Blue Zone club shop.

The moment you’ve been waiting for… our new away kit is here!! You can get your hands on it TONIGHT in the club shop from 6:30pm to 9pm.

That’s an unusual shade of orange

Even as a Ports fan, that’s bloody lovely #IrishLeague