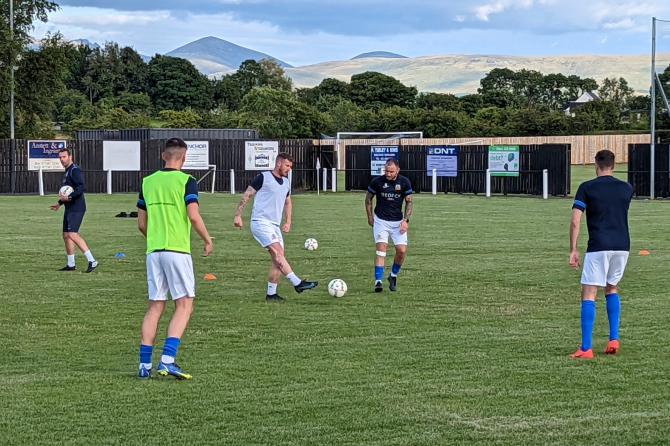 The Glenavon players warm up before Tuesday's game, the Mournes looking resplendent in the background.

There was good early link-up play on the edge of the box between Matthew Fitzpatrick and Michael O'Connor, with the latter flicking the ball into the path of the former for a shot which was punched away by the Rathfriland goalkeeper.

Issac Baird went close too after winning possession midway in the Rangers half. He bore down on goal but dragged his shot wide.

Just before the half hour mark Andy Hall almost scored when he got past the onrushing Rathfriland goalkeeper. He rolled the ball towards goal from the right corner of the box, but a defender got back in time to clear it off the line.

Jamie Doran put Glenavon in front on 39 minutes when he controlled the ball on the bounce on the edge of the box, took a touch and shot on the half volley. His shot went in after skimming off the post.

Ten minutes into the second half Paddy Burns' cross found Josh Doyle but he couldn't turn the ball home.

Doyle could have added a second from the penalty spot after Fitzpatrick was brought down in the box. However the penalty was saved, his follow up was blocked and the third effort was blasted over the bar.

Fitzpatrick did find the net on 75 minutes, dinking the ball over the goalkeeper after getting on the end of a high ball.

Glenavon are back in action tonight against Harland and Wolff Welders in Belfast, kick off 7.15pm.