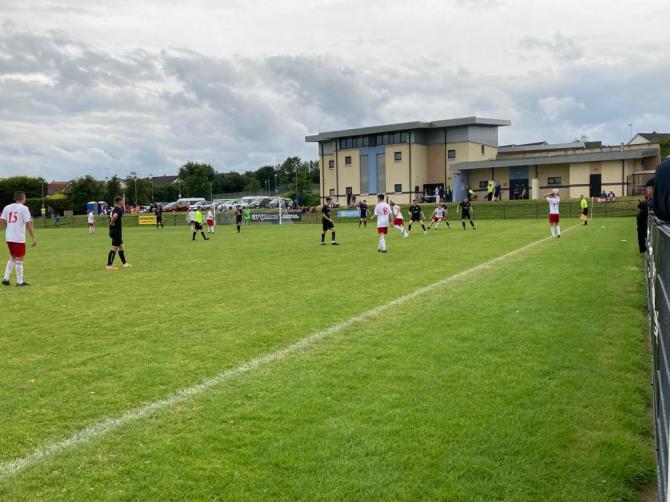 Tomas Sustek would be the County Armagh hero as he saved three spot kicks in a penalty shoot-out win against County Down.

County Armagh would make a dream start as they took the lead inside a matter of minutes. A corner kick met the outstretched leg of Shane Haughey who made no mistake.

After the early goal, both teams began to test each other out with a strike from Owen Donaldson testing the gloves of Timmy Martin.

After the half hour mark, Armagh and Haughey would go close again as his well drive free-kick was tipped over the crossbar.

Down - who lost the Globe semi final to County Fermanagh on penalty kicks - threatened again from a quick counter attack as Donaldson fired wide from 20 yards out.

In the last chance of the first half, Armagh would have a sight of goal as Alex Henning teed up Zach Cowan who had an effort saved.

The first chance after the interval would be carved out by Down as a corner kick met the head of Jake Healy but he couldn't divert his attempt on target.

A quick piece of thinking would see Down level on 48 minutes. A free-kick by substitute Ewan McCoubrey found Rhys Annett and he finished with aplomb.

This would spur Down into life and Annett would go close again as he arrowed wide from Ethan Souza's delightful through ball.

At the other end, Armagh thought they had regained the lead as Cowan cut in from the left-hand side and his curling effort had to be tipped over the crossbar.

The good saves didn't stop there as Armagh substitute 'keeper Sustek used his reflexes to save Mitchell Watterson's piledriver.

At the death, Down would nearly steal it as Jay Boyd's header from a corner kick rattled the post.

The game would be decided by spot kicks and Down would have the early advantage as they scored first and Armagh missed.