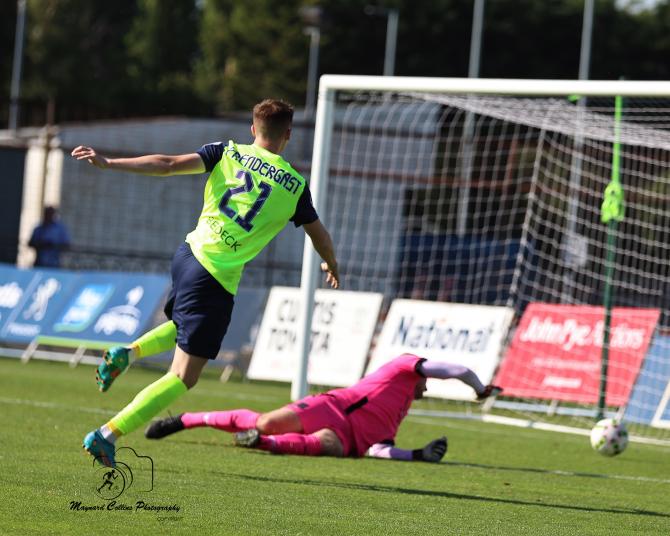 Michael Scott at the Ballymena Showgrounds

Despite finishing the game with nine men, the tenatious Lurgan Blues fully deserved a share of the spoils.

They started with a number of new faces - Micheal Glynn, Jack Malone and Rory Brown all made their debuts while Eoin Bradley and Issac Baird both took their places on the bench.

The Glenavon supporters, who were praised after the game by Gary Hamilton, would have gone into the game full of early season optimism. That would have been rocked on four minutes when Paul McElroy headed the hosts in front with the first goal of the Premiership season.

Robbie Garrett looked to pull the teams level on 26 minutes when he had a shot from the edge of the box, however his low effort was dragged wide.

Just after the half hour mark United bagged their second through Jordan Gibson, who headed home Stephen McCullough's free kick.

Was the game all over before we had even got to half time? Peter Campbell didn't think so and he got Glenavon back into the game, lashing the ball home from a throw-in.

Glenavon had been given a lifeline but within the first 15 minutes of the second half they were up against it once more as they had two players sent off.

First Bradley, who had only been on the pitch for five minutes, was given his marching orders for an incident involving United's Conor Keeley.

Then, perhaps more harshly, Andrew Doyle saw red for a tackle where he seemed to get the ball. After the game there was a suggestion that the defender had both feet off the ground, with Gary Hamilton waiting until he had seen a replay to comment.

The sendings off seemed to galvanise Glenavon and Jack Malone chanced his arm with a long-range free kick which was pushed away Sean O'Neill while down at the other end Rory Brown pulled out an outstanding save to push away a McElroy effort after the forward had jinked into the box from the right.

Garrett had another chance on 87 minutes but his shot from 20 yards sailed over.

Hamilton threw on Baird and Prendergast in the closing stages, both of whom impressed in their limited minutes.

It was the 94th minute Ross Redman played a short back pass. Prendergast gambled and capitalised, applying a cool finish under O'Neill to snatch a point for the Lurgan Blues.

Next up for Glenavon is a home game against Larne on Saturday, kick-off 3pm.