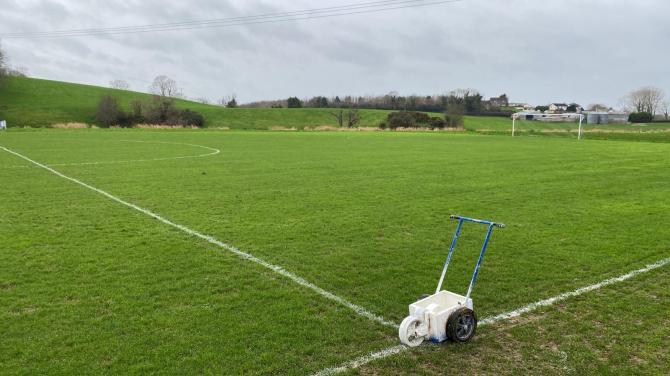 The Holmes, home to Donacloney FC.

It’s all change at Donacloney Football Club, who are set to begin their Mid Ulster League Division Two campaign on Saturday.

Damien Higgins, who was the first team manager since April 2017, stepped down at the end of the 2021/22 season to focus on playing and committee role.

The club moved appointed joint managers Andy Frazer and Colin Jamison in May and they immediately started to focus on preparations for the 2022/23 season.

Andy and Collie have worked together previously, most recently when Andy was manager and Collie his assistant at Downshire YM prior to the pandemic. Collie was part of the management team at Finaghy last season.

The management duo live locally, with Andy saying he is "looking forward to the new season and building the club to make sure the future of the club is one that can push for promotion and beyond."

Andy and Collie have also brought in a well known face as part of their management team. Former 'Cloney 'keeper (and past Chairman) Derek Curran is back, this time as goalkeeper coach. He's donned the gloves himself a couple of times during pre-season but will be a great asset for the 'keepers at the club to learn from and develop.

Despite a tough season last year, 'Cloney Firsts remain in Division 2 for the new season. With Derryhirk United and Glenavy coming down from Division 1, and FC Mindwell, Lurgan Celtic, Bessbrook United and Tollymore United promoted from Division 3 into what was an already strong Division 2, it's sure to be a competitive league.

The season kicks-off on Saturday with Donacloney at home to Armagh Blues, then they welcome FC Mindwell to The Holmes on Wednesday night. After that it's a break for round one of the Marshall Cup away to Moira Albion.

Andy and Collie have brought in a number of new signings adding significant depth to the Firsts squad with competition all across the pitch, which sure to benefit the Firsts over the course of the season, as well as improving the Reserves squad, who continue in Reserve Division 4, managed by Matthew Holmes.

The club continue to make great strides in the community. Away from the football, we've ran a Couch to 5K programme over the summer headed up by Vice-Chairman Johnny Lewis and those taking part have enjoyed the fitness and fun.

After fielding three teams on a few occasions last season, the club’s committee decided to formalise a new third men's team. Donacloney Swifts, managed by Keith Murnaghan, assisted by Josh Johnstone, will be taking on regular friendlies throughout the season. Player numbers are better than ever and the club wants to ensure everyone at the club is getting appropriate game time.

As well as three men's teams, circumstances cane together to start a youth team. Donacloney will be fielding an U17 side in the Lisburn League. They've played a few friendlies already and the group of mainly 15/16-year-olds are excited to get the season started.

No-one ever remembers Donacloney having a youth team before so it's very exciting for the club. It’s great news for lots of young lads from the village and their mates, and they'll have opportunities to play for the men's teams during the season as well as their Saturday morning Lisburn League games.

The U17 management team consists of of Zach Best (manager), Jack Soye, Paul Robinson and Ryan Mawhinney, with the club said to be delighted to make this happen.

Elsewhere on the opening week of Division Two, Lurgan Celtic kick off the season away to Glenavy Youth while Derryhirk United have an away game in Dungannon against West End Hibs.