New signing Carey in contention for Glenavon ahead of Larne clash 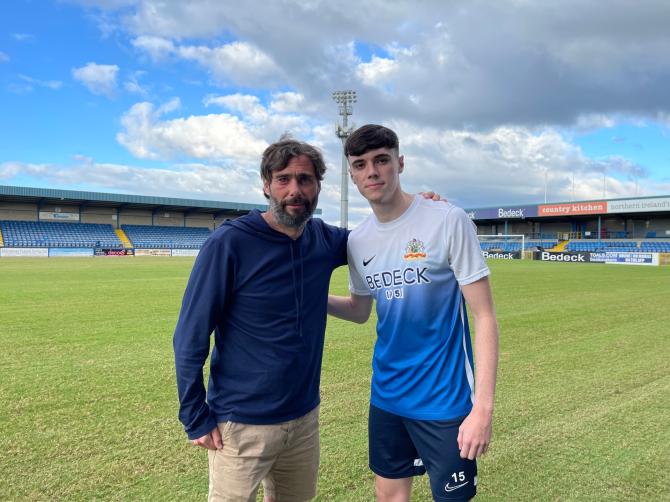 Glenavon’s newest loan signing, Sean Carey, will come into contention for a place in the squad for Saturday’s Danske Bank Premiership clash with Larne.

Carey’s signing was confirmed last night by the Lurgan Blues, with the right sided player signing on loan until January 2.

The 18-year-old has played predominately as a right wing back for Rovers, due to the formation that they play, but Glenavon boss Gary Hamilton told the club’s YouTube channel that he intends to play him on the right of his forward line.

“Sean’s a player that we have been alerted to and someone Shamrock Rovers have very high hopes for,” he said.

“He’s a very fast and athletic player with a lot of ability and potential and hopefully it works well for both parties.

“He fits our mould as a young, exciting player and hopefully he’ll fit in when he meets up with the lads and gets to know them better.”

Hamilton’s men will be out on Saturday to get a result against a Larne side that they have come very close to beating in recent outings, but just haven’t managed to get over the line.

In fact, you have to go back almost 15 years to find the last time that Glenavon beat Larne. Two goals from Colm Kearney and a Neal Gawley header had put the Lurgan Blues ahead at Inver Park on Saturday, October 13, 2007, but an Aaron Black penalty and a brace from Damien McLaughlin pulled the sides back to 3-3.

Another former Larne man, Lewis Hamlin, scored the winner for Glenavon on 50 minutes.

Since then Glenavon and Larne have met 11 times, with Larne winning nine of those.

If Glenavon are to get a win this time around they’ll need the backing of their supporters, who Hamilton praised following last weekend’s comeback against Ballymena United.

“They gave us a massive lift when we went down to nine men,” he said.

“It would be great if we could get that all the time because there’s no denying it, they were like an extra man at a time when we needed it, when our boys were thinking it was too much.

“When the fans are giving you that backing you find that extra bit of energy and thankfully we were able to find that late goal for them.”

Glenavon will be missing Andrew Doyle and Eoin Bradley, who were sent off during last week’s game at the Showgrounds, while a question mark remains over the fitness of Mark Haughey.