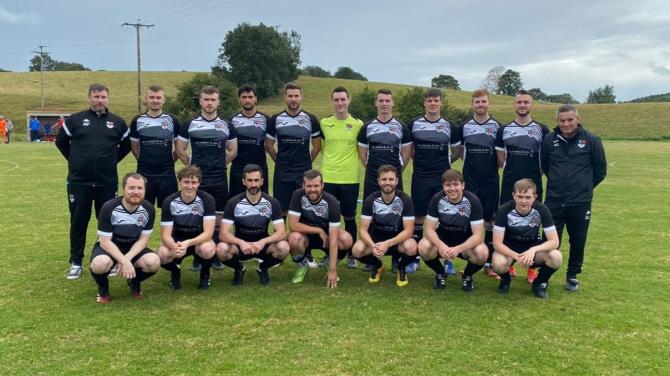 Donacloney pictured before their game with Armagh Blues

Hill Street got life under new boss Stevie McBride off to the best possible start with a 3-1 win over Caledon Rovers on Saturday.

Goals from Matty Reynolds, Jamie Hall and Kyle Cousins gave the Lurgan side all three points in the first game of their Division One campaign.

Lurgan Town’s game against Scarva Rangers in the same division was postponed.

In Division Two Lurgan Celtic began their league campaign with a five-star win over Glenavy Youth.

Celtic took the lead with 21 minutes on the clock when a Withers cross found Toman, who made no mistake.

They doubled their lead in the second half when Reynolds tucked away an incisive Gilmore pass, and the latter set up Withers for the Hoops’ third of the game with 20 minutes left to play.

Five minutes later Reynolds scored his second and Celtic’s fourth, before the scoring was rounded off by Withers on 78 minutes.

Andy Frazer and Collie Jameson will be looking to turn things around for their midweek game against a formidable FC Mindwell side.